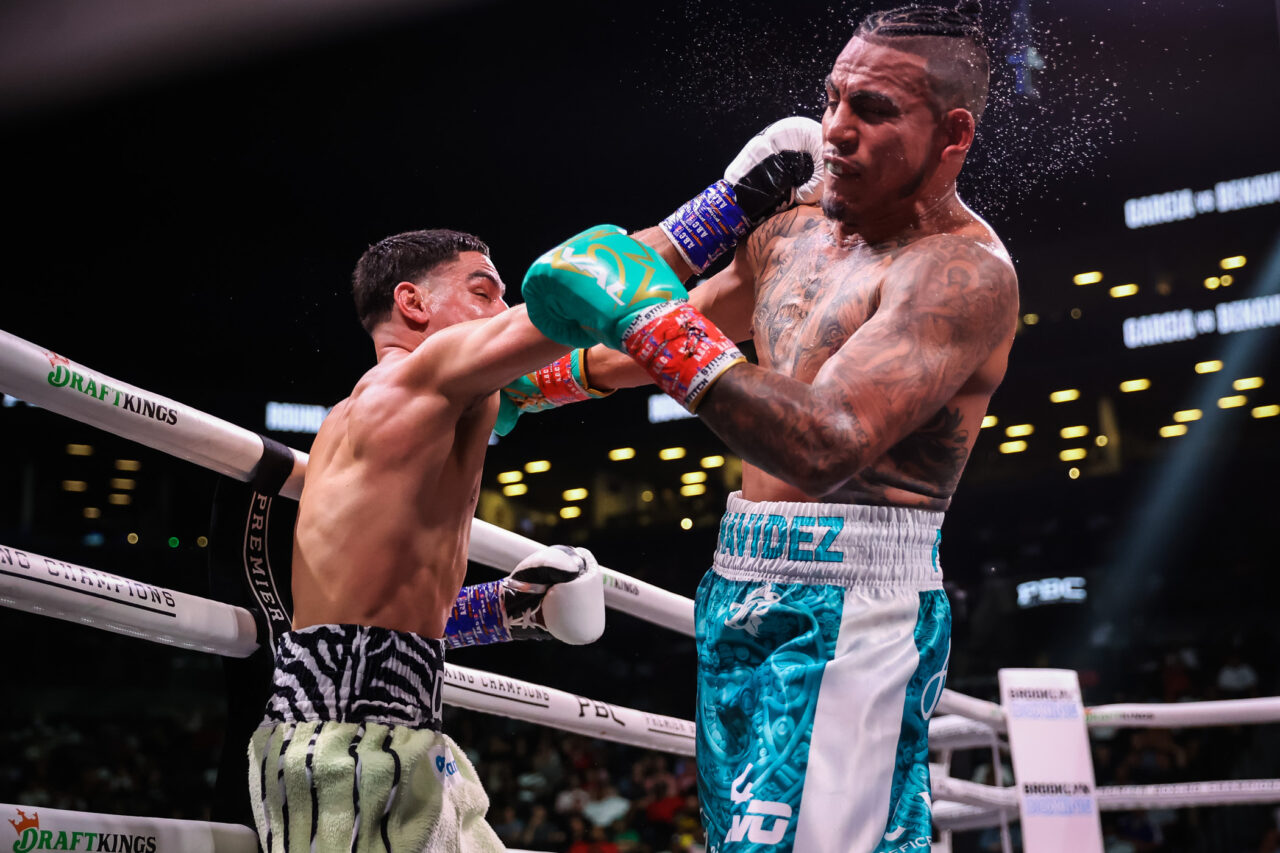 BROOKLYN – July 31, 2022 – Two-division world champion Danny “Swift Garcia dominated in his super welterweight debut Saturday night, cruising to a majority decision victory over exciting contender Jose Benavidez Jr. in the SHOWTIME main event from Barclays Center in Brooklyn headlining a Premier Boxing Champions event. He saved perhaps his most expressive moment post-fight when he broke down in the ring discussing his struggles with mental health with SHOWTIME reporter Jim Gray, showing the authenticity that has made him such a fan-favorite in Brooklyn.

“I did take a break going through mental things, things went dark, I went through anxiety, deep depression, just trying to be strong,” said a visibly emotional Garcia. “It was the pressure of life, being a good dad, just letting it out right now, because it was all stuck inside. It rained on me for a year and a half and the only way to do better was to fight again. I’m a fighter. If you battle anxiety and depression, you can get out of it, that’s what I did today. I fought.”

Philadelphia’s Garcia (37-3, 21 KOs) has become a staple at Barclays Center ever since headlining the arena’s first boxing event in 2012, and his return on Saturday night against Benavidez (27-2-1, 18 KOs), saw him pick up his seventh victory in Brooklyn. (Watch seventh-round highlight HERE)

After runs as a world champion at 147 and 140 pounds, Garcia debuted at 154 pounds after a nearly 20-month layoff. Known as a counterpunching expert, Garcia went on the attack early and often, targeting Benavidez’s body on his way to landing a career-high of 153 body shots according to CompuBox. Garcia’s superior hand and foot speed left Benavidez trailing him for much of the night, looking to land right hands over Garcia’s vaunted left hook.

Benavidez best moment came in round nine when he connected on one of those right hands and popped Garcia’s head back, but he was unable to capitalize on the attack enough to change the trajectory of the fight.

“I’m happy with my performance,” said Benavidez. “I feel like I did good. I’m fighting in his backyard, one of the best, I took his punches like they were nothing. I thought I won the fight. But it is what it is, a loss makes you stronger.

“It’s tough, things don’t always go your way, there are ups and downs. I try to be positive, like when the doctor said I would never walk again. I didn’t let that get to me. I kept on going.”

Overall Garcia ran up a 233 to 117 edge in punches landed and owned a 31% connect rate compared to Benavidez’s 20%. After 12 rounds, Garcia had done enough to earn the decision by scores of 117-11, 116-112 and a surprising 114-114. After the fight, Garcia credited his father and trainer Angel Garcia with staying by his side throughout his battle with anxiety and depression.

“Angel was there with me the whole way,” said Garcia. “I’m nothing without this man. I thank him every day. People ask me all the time, why do I fight? I make a lot of money. Why does Warren Buffett still make money? I’m a fighter. This is what I do, what I love to do.”

Garcia also added two intriguing potential future opponents he would like to face.

“I’d like the rematch with Keith Thurman, he took my ‘0,’” said Garcia. “I’ll also take [WBA Middleweight Champion] Erislandy Lara for the middleweight title at 154 pounds.”

“I truly love fighting in the U.S. and I love New York so I said before you will see me more,” said Demirezen. “I was nervous because he’s a strong fighter and I could have been much better, but it’s my first time here and he’d fought here before.”

In his 11th fight at Barclays Center, Kownacki rode the urging of his hometown fans to a fast start as he targeted Demirezen’s body frequently in round one. As the bout progressed, Demirezen flipped the script and ended up being the more aggressive fighter, throwing 915 punches to Kownacki’s 851, while landing 239 power punches compared to Kownacki’s 186.

After back-to-back losses to Robert Helenius, Kownacki had hoped to return to the win column and back to his standing amongst the heavyweight contenders, but was turned back by the determined Demirezen, who stopped Gerald Washington in January.

“I’m a bit rusty, I think he was getting off first in the exchanges, I didn’t’ sit down as much, I think the rust played a part, being out so long,” said Kownacki. “I was out of the ring since last October, camp was good but I don’t know, I was letting him get off first, I wasn’t moving my feet. I went back to the old me instead of the first few rounds when I was doing good.

“I have two kids, I’ll have a long talk with my wife to see what I want to do. I’ve had so many fights here, so many great memories, I don’t want to go out like a loser. I would like another fight to leave my fans with a win.”

In round 10, Kownacki, with blood dripping from his left eye, again was able to bring his legion of fans to their feet as he put together a courageous effort in rocking Demirezen with a right hand, forcing Demirezen to temporarily fight on his back foot. However, Demirezen recovered to win the round, and sweep the last two rounds on all three cards to clinch the victory.

“I promised everyone a war, and that’s what the people got,” said Demirezen. “I beat him in his hometown. I want to be an inspiration and a role model for Turkish youngsters that were watching this fight. I hope I made them proud.”
In the telecast opener, unbeaten rising star Gary Antuanne Russell (16-0, 16 KOs) delivered a sixth-round TKO (:50) over former two-division Rances Barthelemy (29-2-1, 15 KOs) in their super lightweight clash to keep his perfect knockout streak intact. Russell landed a clean leaping right hook that dropped Barthelemy early in the round, and while Barthelemy was able to get to his feet, referee Shada Murdaugh waived off the action, drawing boisterous complaints from Barthelemy, his corner and the crowd in attendance. (Watch video highlight HERE)

“I know Rances is a high-grade, class athlete and he wanted to continue,” said Russell, who revealed post fight that he hurt his left hand in the fifth round. “Emotions were high. Whether we are bruised or beaten, as a warrior, you always want to continue but the referee was doing his job and if he was allowed to continue it would have been the same outcome.  I would have gotten him.

“In the sixth round I had him backing up. I knew he was looking for his right cross and I caught him backing up and I shot my hook and put him down, he was buzzed but he wanted to keep going. He’s a warrior.”

“This is the most bitter loss of my career,” said Barthelemy. “I’m destroyed. Don’t get me wrong, this wasn’t Russell’s fault at all. I’m a veteran, and I had been through something like that plenty of times in my career. The referee treated me like a rookie instead of the two-time world champion I am.”

The bout featured intriguing action from two skilled southpaws, as Russell and Barthelemy went toe-to-toe in a compelling round one that saw both men throw over 60 punches and each eat big shots. As the action progressed, Barthelemy was able to find success countering the hard-charging Russell, who dictated much of the fight’s pace.

The fighters threw within five total punches of each other per round across the bout, including combining to throw 361 power punches out of 515 total thrown. Barthelemy expressed his displeasure with the referee’s decision post-fight and staked his claim to a rematch against Russell. At the time of the stoppage, the score totals were 49-46 twice and 48-47 in favor of Russell.

Fighting for the first time since the passing of his father and lifelong trainer Gary Sr., Russell was led in his corner by his brother and former WBC Featherweight World Champion Gary Russell Jr., as he looks to continue his ascent in the 140-pound division.

“I want to tell my father up above I did it for him, we’re going to keep it going for pops,” said Russell. “This is something my dad instilled in us, no matter what you go through in life and death, two things are inevitable, he raised us to be men and well-rounded men. Being thorough means to be prepared, and he prepared us for boxing and for life outside of boxing. I thank my father and I did what I had to do.”

In live streaming action prior to the telecast, SHOWTIME BOXING COUNTDOWN saw top middleweight contender Sergiy Derevyanchenko (14-4, 10 KOs) cruise to a unanimous decision over Joshua Conley (17-4-1, 11 KOs) by scores of 99-91 twice and 98-92 after 10 rounds.