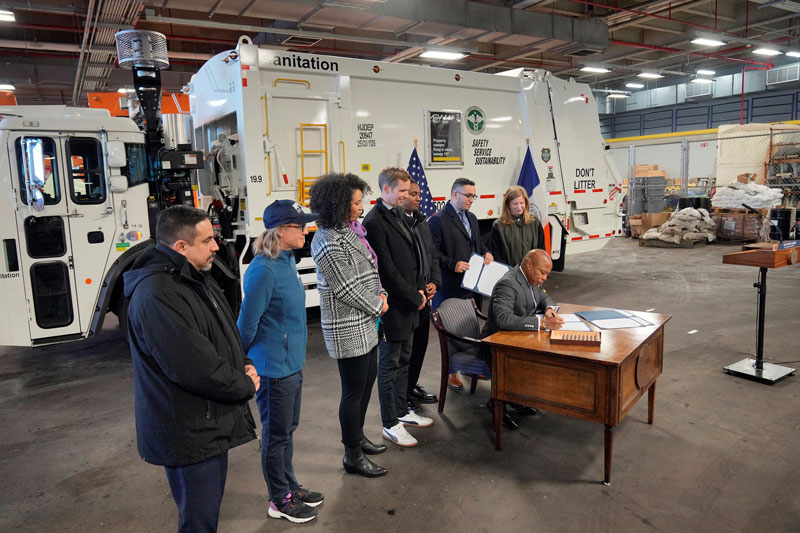 NEW YORK – New York City Mayor Eric Adams today signed four pieces of legislation to fight rats and build a cleaner city. The legislation will create rat mitigation zones to build on successful mitigation efforts, codify Mayor Adams’ announcement to drastically reduce the time that trash sits on city curbs, and reduce rats in construction areas and other buildings with large rodent infestations. Taken together, these bills will reduce rats across New York City and build a cleaner and more welcoming city for all New Yorkers.

“Today I’m proud to sign four bills to help create a cleaner and more welcoming city for New Yorkers,” said Mayor Adams. Last month, I announced a once-in-a-generation change to reduce the amount of time black bags sit on the curb and just last week we announced our ‘Get Stuff Clean’ initiative. This legislation doubles down on our efforts and is another important step to put a dent in our rodent population. Rat-free streets are vital to vibrant neighborhoods and our city’s economic recovery, and I thank the City Council for their partnership in keeping our city squeaky clean.”

“Today’s bills represent another battle won in the war on rats,” said Deputy Mayor of Operations Meera Joshi. “Together with the City Council, New York City is expanding extermination efforts, reducing time for trash bags to be on the street, and finally ending the rodents’ all you-can-eat buffet.»

“Everywhere I go, people say thank you for prioritizing the cleanliness of our neighborhoods and I always tell them the same thing – I couldn’t do it without our sanitation workers, without our mayor, and without our partners on the City Council, many of whom have made this a priority after too many years of letting cleanliness fall by the wayside,” said New York City Department of Sanitation (DSNY) Commissioner Jessica Tisch. “The bills signed into law today will make a meaningful difference in the appearance of our city and in its recovery.”

“Every New Yorker has the power to promote a rat-free New York City and these bills will support residents and make our neighborhoods cleaner,” said New York City Department of Health and Mental Hygiene (DOHMH) Commissioner Dr. Ashwin Vasan. “Rat mitigation zones give rats no safe quarter, and the tools in these bills empower all of us send rats packing!”

“Construction activity is essential to grow and properly maintain the buildings in our city,” said Acting New York City Department of Buildings Commissioner Kazimir Vilenchik, P.E. “But construction work is also responsible for driving rodents from their hiding holes out onto our city street and sidewalks. By building upon existing regulations to mitigate rodent populations in and around construction sites, this new legislation is a decisive step towards turning the tide in our fight with the four-legged menace.”

The city continues to expand initiatives to address rats and increase cleanliness. Last week, Mayor Adams announced $14.5 million in new funding this fiscal year for the ‘Get Stuff Clean’ initiative to clean more than 1,000 ‘No Man’s Land’ neglected areas around the city, increase litter basket service, expand camera enforcement against illegal dumping, and bring on additional rat exterminators — resulting in faster and more reliable cleaning of every corner of the city.

“We have achieved a monumental victory in humanity’s war against rats,” said New York City Councilmember Shaun Abreu. “New Yorkers will not have to fear as many rats hiding in late-night shadows, or more frequently, rampaging through our subway system and sidewalks. Future generations will never understand why we let waste sit out for extended periods of time. Like the fax machine, typewriter, and blackberry, our current collection schedule will be seen as archaic, comical, and out-of-date. This was not an easy feat, but city-altering change never is. New Yorkers can rest easy knowing that we are fighting back.”

“Construction in New York City causes enough issues without having to also worry about rats,” said New York City Councilmember Erik Bottcher. “Our bill will ensure that rodent abatement is a part of any large construction project moving forward. I want to thank Mayor Adams, Commissioner Tisch, Speaker Adams, and my ‘Rat Pack’ colleagues for their support of my bill and this entire package of legislation.”:

“Today, the mayor cements into law our legislative package that works for the benefit of all New Yorkers,” said New York City Councilmember Chi Osse. “While rodents have plagued our city since it was called New Amsterdam, the pandemic and its consequences bolstered their population, handing our streets over to these furry foes. With these bills becoming law, the city equips itself with the necessary tools to wage and win this war on public enemy number one: rats. I thank my colleagues for their partnership and Mayor Adams for sharing our vision of a cleaner and healthier city for all.”

“Today, we declare that rats will no longer be the unofficial mascot of New York City,” said New York City Councilmember Sandy Nurse. “Passed by the council and signed by the mayor today, the Rat Action Plan is a response to the tens of thousands of rodent sightings and complaints made across the five boroughs. The Rat Action Plan will make significant progress toward making our city cleaner, with stronger rat mitigation activities and greater accountability. To continue our efforts against rats, I look forward to working with my council colleagues and the administration on further legislation to achieve our city’s zero waste goals.”