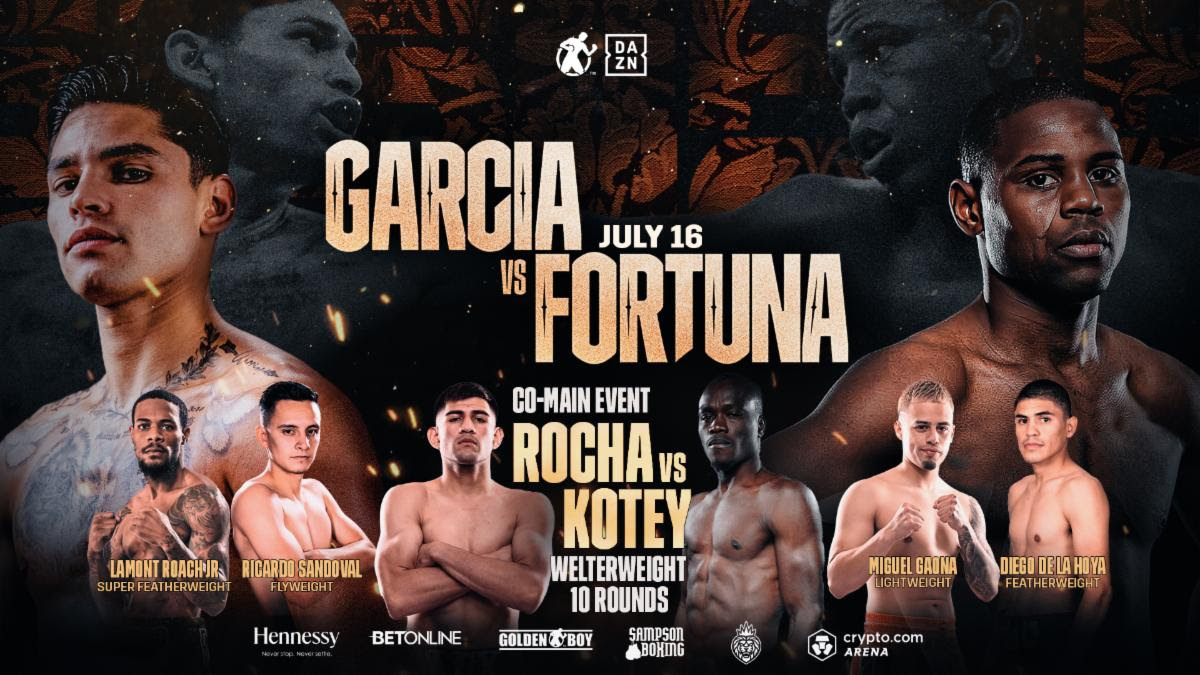 ORANGE COUNTY’S ALEXIS ROCHA TO FACE SAMUEL KOTEY AS THE CO-MAIN EVENT FOR GARCIA VS. FORTUNA
LAMONT ROACH JR. TAKES ON ANGEL RODRIGUEZ FOR THE WBA SUPER FEATHERWEIGHT TITLE ELIMINATOR
SATURDAY, JULY 16 FROM THE CYPTO.COM ARENA STREAMING EXCLUSIVE ON DAZN
Tickets on Sale Now!
LOS ANGELES, CA (June 23, 2022): The undercard for Garcia vs. Fortuna promises a night full of action at the historic Crypto.com Arena on Saturday, July 16, as Orange County’s fan favorite, Alexis “Lex” Rocha (19-1, 13 KOs) of Santa Ana, CA takes on Baltimore’s Samuel “Unbelievable” Kotey (23-3, 16 KOs). The 10-round welterweight fight will serve as the co-main event for Garcia vs. Fortuna. Also, on the DAZN live stream, Lamont Roach Jr. (22-1-1, 9 KOs) of Washington, D.C., is scheduled for 12-rounds for the WBA Super Featherweight Title Eliminator against Angel “Humildad” Rodriguez (20-1, 10 KOs) of Barranquilla, COL. Opening up the live stream, Rialto’s Ricardo “El Nino” Sandoval (20-1, 15 KOs) will take on undefeated fighter David “Medallita” Jimenez (11-0, 9 KOs) of Cartago, CRI, in a 12-round fight for the WBA Flyweight Title Eliminator. All fights will take place on Saturday, July 16, and will stream live worldwide, exclusively on DAZN, starting at 5:00 p.m. PT / 8:00 p.m. ET.
Ahead of that, The Golden Boy Fight Night: Garcia vs. Fortuna Prelims will stream on DAZN and the Golden Boy Boxing YouTube page. The card will be headlined by Diego De La Hoya (22-1, 10 KOs) of Mexicali, MX, in a 10-round featherweight fight against Enrique Bernache (24-13, 12 KOs) of Guadalajara, MX. Next, Los Angeles’ Miguel Gaona (2-0, 1 KOs) will look to add another victory to his record when he faces Jonathan Guzman (0-5) of Aguada, PR, in a 4-round lightweight fight. Finally, Lawrence King (11-1, 9 KOs) of San Bernardino, CA will fight in a scheduled 6-round super middleweight fight against an opponent yet to be confirmed. Additional fights and opponents will be announced shortly.
“At this point in my career, it doesn’t matter who my opponent is, all that matters is continuing to knock opponents out and my personal growth as a fighter,” said Alexis Rocha. “No opponent can dictate how my career moves. I carry the power to control my own destiny and career. July 16th is another opportunity for me to take control of my destiny and to continue climbing to the top of the sport. I can’t wait to share a card with Ryan in a place so close to home — Los Angeles. I’m ready to put on a show. Thank you to Golden Boy and all of my fans for the continued support.”
“To be showcased as the co-main event in one of the biggest fight cards of the year in the biggest arena in Los Angeles, is a huge opportunity for me,” said Samuel Kotey. “I promise my fans I will not disappoint them and on July 16, everyone will know who Samuel Kotey is.”
“Just in case the division forgot about me I’m putting them on notice on July 16,” said Lamont Roach Jr. “This is my opportunity to get closer to a world title shot and I am going to win and put on an impressive performance.”
“This is my chance to prove that I am an elite level fighter worthy of a world title shot,” said Angel Rodriguez. “Winning the WBA Super Featherweight Title Eliminator will prove I have what it takes to go the distance in this sport and one day call myself a world champion.”
“I am excited for this fight because I will be fighting in the biggest arena in my hometown,” said Ricardo Sandoval. “This is a big opportunity for me to show my fans, friends, and family all the hard work I have put in to get here. This fight is for a title eliminator, I am ready to fight for a world title next and on July 16 I will prove it to the world.”
“I am ready for a challenge on July 16,” said David Jimenez. “I will be fighting to keep my undefeated record, earn a place in the rankings, and be a step closer to a world title shot after I win the WBA Flyweight Title Eliminator. This is my chance and I will do everything in my power to be declared the winner on July 16.”
Tickets for Garcia vs. Fortuna are on sale now and are priced at $500, $300, $200, $100, $75, and $50 not including applicable service charges. Tickets will be available for purchase online at AXS.com, CryptoArena.com and GoldenBoyPromotions.com.
Garcia vs. Fortuna is a 12-round lightweight fight presented by Golden Boy in association with Sampson Boxing. The event is sponsored by Hennessy “Never Stop. Never Settle” and “BetOnline – Your Online Sportsbook Experts.” The fight will take place on Saturday, July 16 at Los Angeles’ Crypto.com Arena and will be streamed live worldwide on DAZN.