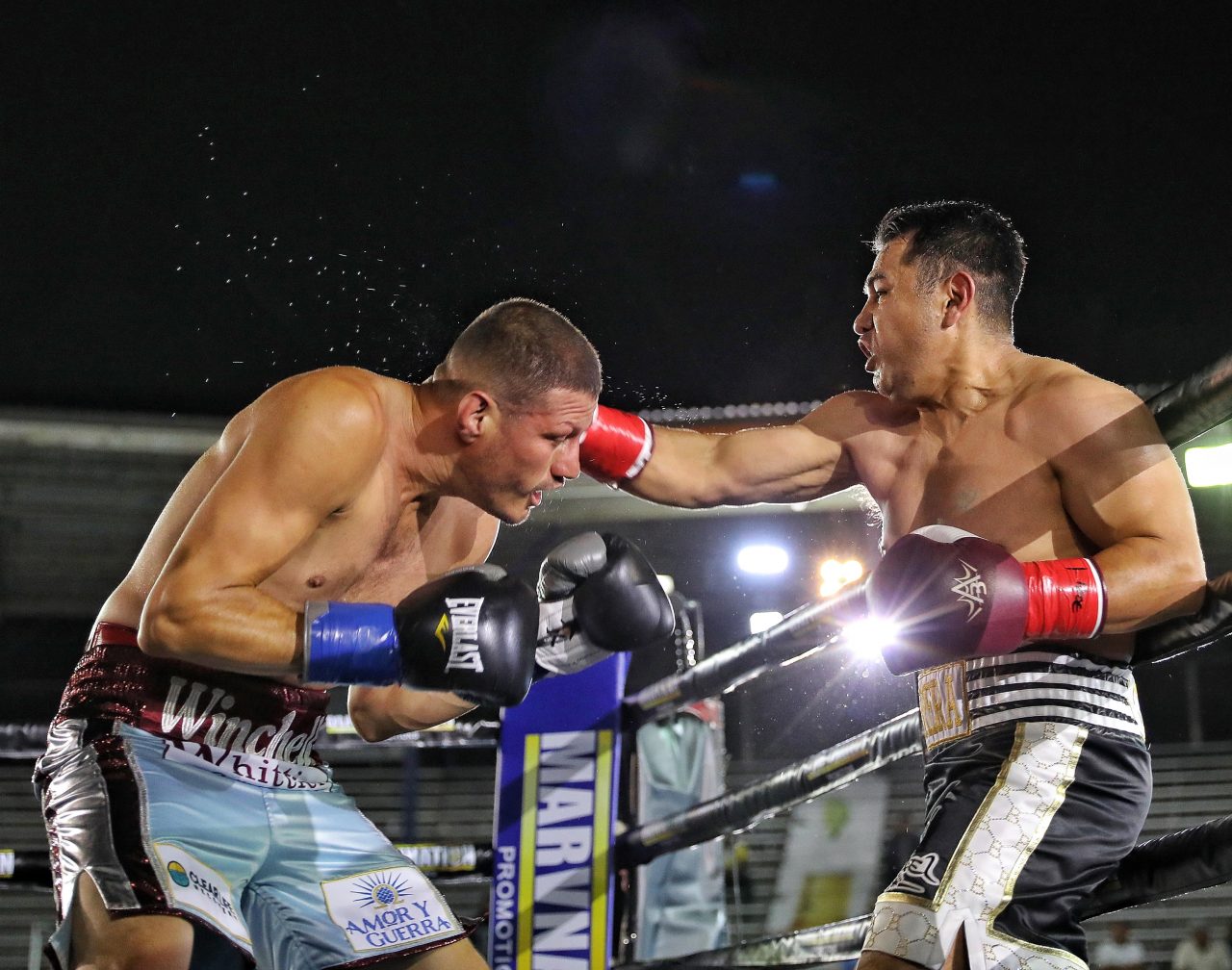 PHOTOS by Ray Navarrete for MarvNation
PICO RIVERA, CA. (June 14, 2021) – Marco Antonio Barrera and Jesus Soto Karass stepped in the ring once again, but this time for a six round, two-minute exhibition, no headgear Exhibition fight for the fans. It had been ten years since Barrera retired and almost three years for Soto-Karass, but that did not stop them from going all out this past weekend at Pico Rivera Sports Arena in Los Angeles, CA in a MarvNation Promotions event. The crowd enjoyed every minute and at the end of the fight, Former Champion Erik Morales stepped in the ring to face off with Marco Antonio Barrera who tentatively have a fight scheduled this Summer.
“It was amazing to hear the crowd once again from the ring, it’s definitely one of the things I miss the most after retirement,” Barrera said afterward. “I love the crowds. All my friends, family, the fans that came out thank you so much.”
«I took this fight to prepare my body for a future fight with Erik Morales. I felt good overall and I know we will give fans a great fight as well! I thank Jesus Soto-Karass and Marvin Rodriguez for this opportunity and can’t wait to do it again.» said Barrera.
«When Marvin Rodriguez asked me about a fight with Barrera, of course I said yes! I wouldn’t miss the opportunity to fight with a legend. Thank you Marco Antonio for sharing the ring with me tonight, the energy was amazing.» said Jesus Soto-Karass.
Barrera vs. Soto-Karass was a fight without headgear and this really excited the Boxing fans at the venue who thought the fight would be with headgear. Every round was back and forth punches just like you’d expect from these two Mexican Warriors. At the end the fans gave a standing ovation to the two legends.
In the co-main event, Pico Rivera’s Angel «El Moreno» Rodriguez (9-0, 6 KOs), who’s ring entrance by horse, hyped up the audience so much, delivered another power-punching display, defeating Bergman Aguilar (15-7-1, 5 KOs) by third round KO.
“I was supposed to fight for a WBC regional title, but unfortunately due to Covid, my opponent was unable to travel,” said Rodriguez. “I couldn’t let my fans, friends and family down so I took this fight regardless of the circumstances. I’m here to give the fans a show, to grow in the sport and one day fight for a World Title .”
In the FITE.tv streamed opener, Chris Reyes (10-0, 9 KOs) under the tutelage of Jose Benavidez Sr., continues his ascent up the Welterweight ranks. Undefeated Reyes stopped Braulio Avila by 2nd round KO, dominating in the ring.
Los Angeles Native Pablo Melgar (4-0, 3 KOs) and Cuba’s Adrian Leyva (2-2, 0 KOs) gave the fans an expected phone booth style fight. Leyva pulled off the upset defeating Melgar by Unanimous Decision.
In a competitive, exciting fight Oliver Galicia (3-0-1, 3 KOs) and Michael Land (1-2-1, 1 KO) ended in a Majority Draw that left the fans asking for more.
Undefeated Long Beach Top Prospect Tyrrell Washington (3-0, 3 KOs) defeats Ginno Montoya by first round KO.
Ukraine’s Oleg Zubenko (3-1-1, 0 KOs) and Diego Padilla (1-2-1) in a back and forth brawl ended in a Majority decision.
Beto Duran and Cynthia Conte hosted the MARVNATION PROMOTIONS stream LIVE on FITE.tv which was streamed internationally. Los Angeles County Sheriff Alex Villanueva made an appearance supporting Boxing in Los Angeles. Recording Artists Frankie J and Janet Uribe sang the National Anthems. It was definitely a boxing event to remember in the Los Angeles area