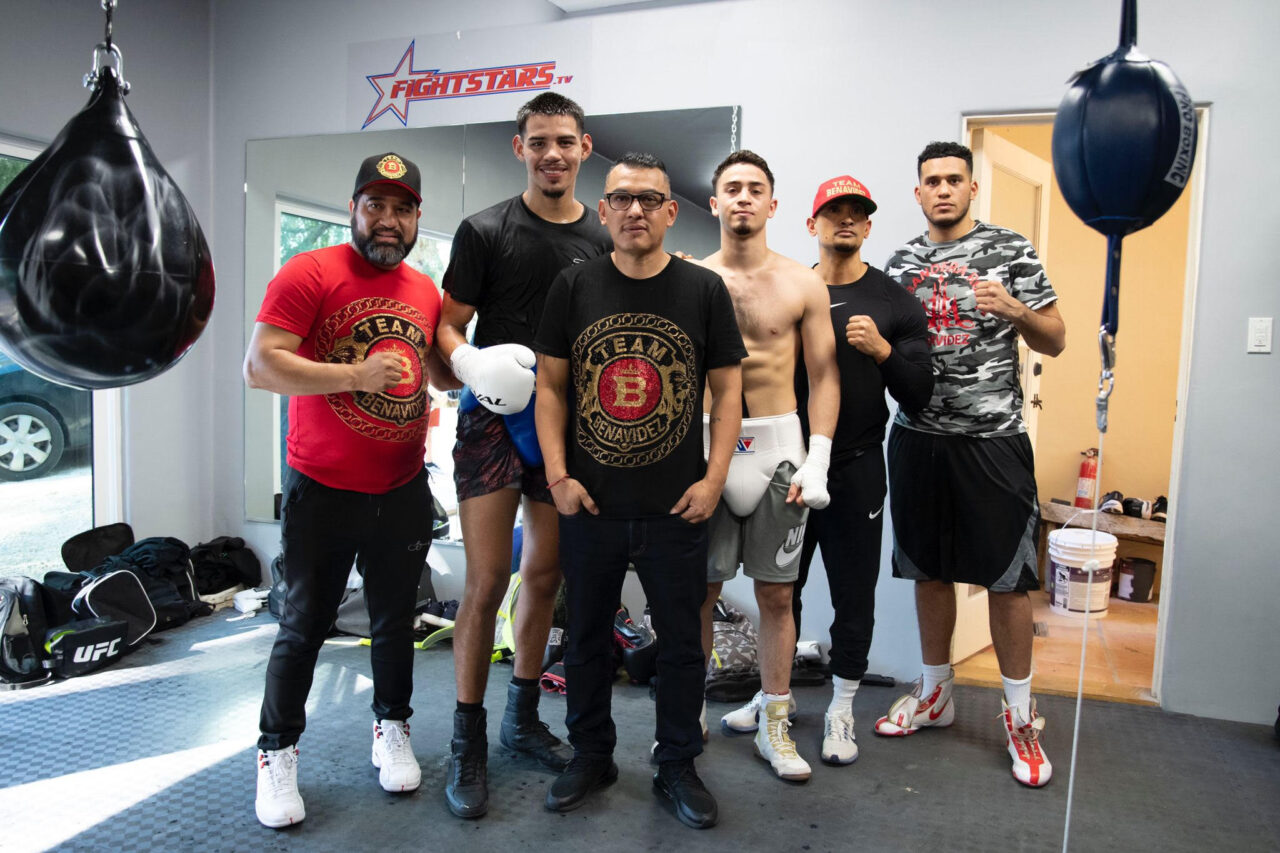 Photos by Lina Baler/@seeyoringside
RANCHO SANTA FE, CA (February 16, 2022) – Rising Super Middleweight Star, Diego Pacheco, (13-0, 10 KOs) along with stablemates 2021 Prospect of the Year, Jose “Rayo” Valenzuela, (11-0, 7 KOs) and Former 2x WBC World Super Middleweight Champion, David “El Bandera Roja” Benavidez, (25-0, 22 KOs) hosted a Media Workout at the luxurious Fightstars TV camp house. Diego Pachecho is in preparation under the tutelage of Jose Benavidez Sr. for his upcoming fight against Genc Pllana, (9-3-1, 5 KOs), March 5th, 2022 at the Pechanga Arena in San Diego, CA under the Matchroom Promotions banner and LIVE on DAZN.
Team Benavidez Fight Camp welcomed media to their camp house to show a small glimpse of the hard work Diego Pacheco, Rayo Valenzuela and David Benavidez are putting in and even included explosive sparring sessions by Pacheco and Valenzuela. The Benavidez Fight Camp would like to thank Fightstars TV, Los Amigos Walnut Restaurant and the media who made the drive for this special Media Day. Next month, they will be hosting a bigger Media Workout for all to come, stay tuned.
Below, quotes from the fighters:
DIEGO PACHECO
“I feel strong, I feel focused, I’m ready to do all the hard work it takes to become a World Champion. March 5th, you will all see how hard I have been working these last few weeks.”
“Like I said before, as a fighter, there is always room for improvement. With Jose Benavidez Sr., I have learned so much in so little time. He pushes us beyond our limits.”
“Here at the Fightstars TV camp house, there are no distractions. It’s just us, our team, my stablemates, pushing each other hard and having fun doing what we love to do.”
JOSE “RAYO” VALENZUELA
“Right now it’s looking like I might be on the Spence vs. Ugas card but I don’t have a definite date, regardless, I’m training hard to be always ready. I’m on a mission, I’m hungry, the ring is my playground. I can’t wait to get in there and have some fun!”
“Bring on any opponent, I’m ready to go from a prospect to a contender!”
DAVID “EL BANDERA ROJA” BENAVIDEZ
“I don’t have a definite fight day, but I’m here training hard with my team to be ready to face David Lemiuex and become a 3x World Champion.”
“Of course I want to fight Canelo, Plant, Charlo any of those guys, but they don’t want to fight me, so I’ll fight who I have to fight, become a World Champion until they have no choice but to face me.”
“I’ve seen a lot of progress in Diego Pacheco training with us, he does everything he’s got to do, no excuses. He shows the discipline in camp, March 5th we will see it in the ring.”