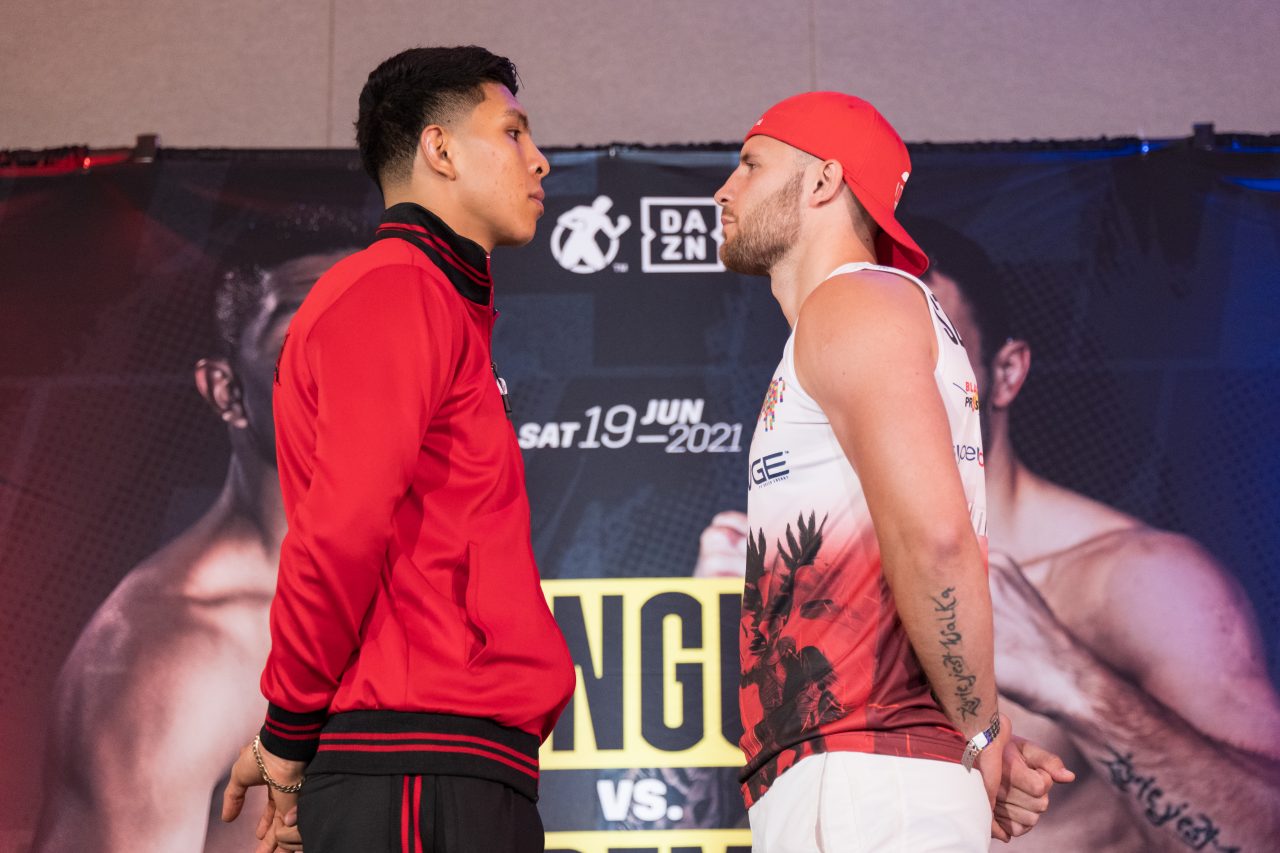 JAIME MUNGUIA VS. KAMIL SZEREMETA FINAL PRESS CONFERENCE QUOTES, PHOTOS AND VIDEOS
SATURDAY, JUNE 19 AT UTEP DON HASKINS CENTER IN EL PASO, TEXAS AND LIVE ON DAZN
Photo Credit: Sye Williams/Golden Boy
Video Credit: Golden Boy
EL PASO, TEXAS (June 17, 2021): Jaime Munguia (36-0, 29 KOs) and Kamil Szeremeta (21-1, 5 KOs) hosted their final press conference today ahead of their 12-round fight for the WBO Intercontinental Middleweight Championship. The fight will take place at The University of Texas at El Paso’s Don Haskins Center and will be streamed live exclusively on DAZN worldwide, excluding Mexico beginning at 12:30 p.m. PT/1:30 p.m. MDT/3:30 p.m. ET.
Below are what today’s main event fighters had to say:
JAIME MUNGUIA, WBO Intercontinental Middleweight Champion:
“Thank you to all. I’m excited to be fighting in El Paso. It’s been a dream of mine. It’s a place where many great fighters have fought. It fills me with pride to be able to deliver a great show. I think I need to make a statement. I’m on the rise, so I have to keep doing things better with each fight. We have a great fighter in front of us. We have a lot of respect and admiration towards him, so we have to make sure we do things correctly so that we get a big fight next.”
KAMIL SZEREMETA, Former World Title Challenger:
“This fight will be great. I’m happy to fight against such an amazing fighter. On Saturday, I will do my best to give you all a great show. I am very happy that I am fighting an undefeated boxer. It makes it more meaningful. I’m not worried about being in a place that will be full of Jamie Munguia’s supporters. I don’t even care. I’m used to this. I’m always fighting in other territories.”
ERIC GOMEZ, President of Golden Boy:
“We have a rich history here in El Paso. We’ve done many shows here, and many champions have fought here. Texas is a great state for boxing, but there’s also something special about El Paso. This will be a great show, and it’s stacked from top to bottom. We’re going to kick off the broadcast with Blair Cobbs, one of the top rising stars. He’s a very exciting fighter. We also have Marlen Esparza, who bounced back from her first loss and now fighting for a world title. The co-main event is also going to be great with Bektemir taking on Gabriel Rosado. And, of course, it will be topped off by the main event with Jaime Munguia. He’s Mexico’s next biggest star.”