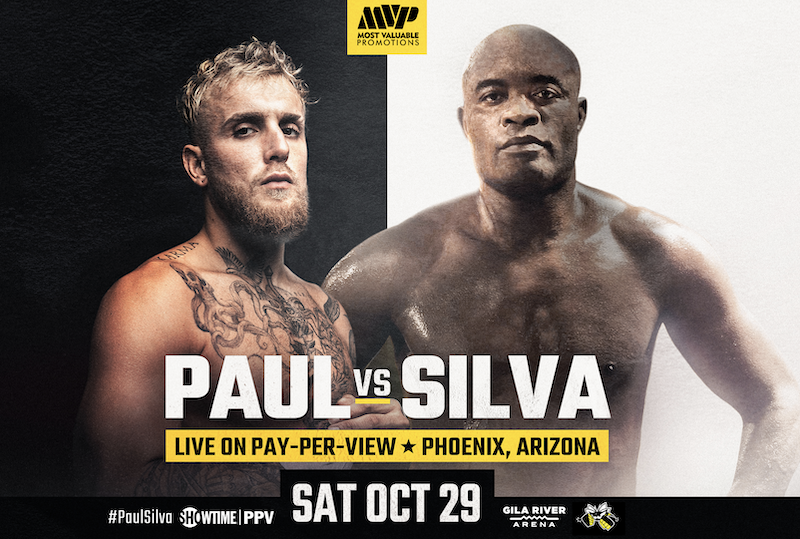 September 12 in Los Angeles; Tickets To The Event Go

NEW YORK – September 6, 2022 – Most Valuable Promotions (MVP) and SHOWTIME SPORTS® today announced that international superstar and serial risk-taker Jake “The Problem Child” Paul will face the biggest challenge of his career when he takes on UFC legend and professional boxer Anderson “The Spider” Silva at Gila River Arena in Phoenix, Ariz., on Saturday, October 29 live on SHOWTIME PPV. The bout will be contested over eight rounds at a catchweight of 187 pounds. Tickets will go on sale Wednesday, September 14 at 1 p.m. ET and can be purchased at ticketmaster.com.

Often compared to the Muhammad Ali and Pelé of mixed martial arts, Silva authored one of the strongest resumes of any MMA fighter before returning to pro boxing in 2021. Silva holds the UFC record for the longest title reign in the organization’s history: 2,457 days; the most consecutive UFC victories: 16 and the most finishes in UFC title fights: nine. Known for his superb striking ability in the cage, Silva (34-11, 1 NC in mixed martial arts) has found success as he’s transitioned to boxing in a remarkable second act of his career. The Brazilian announced his return as a world-class boxer in June 2021 when he soundly defeated former middleweight boxing champion Julio Cesar Chavez Jr., via split decision that wasn’t as close as the scores indicated.

After scheduled bouts with pro boxers Tommy Fury and Hasim Rahman Jr. were scuttled, Paul (5-0, 4 KOs) will square off against arguably a far tougher opponent. With deft footwork and an educated jab, Silva showed against Chavez that he is near the peak of his striking powers in what shapes up to be one of the most intriguing bouts of 2022.

“Anderson ‘The Spider’ Silva is the most versatile fighter the world has ever seen,” said Paul. “Just a year ago he outclassed boxing champion Julio Cesar Chavez Jr., and showed the world why he is often referred to as the greatest fighter of all time. Every expert, from MMA to boxing, has said Jake Paul won’t fight Anderson Silva. They said Jake Paul is afraid of Anderson Silva, and Jake Paul would lose to Anderson Silva. Well, to all the non-believers – Jake Paul is fighting Anderson Silva. It’s an honor to have the opportunity to share the ring with the greatest UFC striker of all time. On Saturday, October 29, I will walk humbly into the ring, touch gloves with a living legend and do my best to exterminate ‘The Spider.’”

“I know that in life everything has its purpose,” Silva said. “Nothing comes just by chance. So, I thank God for my health, my family and my team for providing me with this opportunity to continue doing the thing that I love the most. I believe this will be the biggest combat event of the year and will truly make history in the sport forever. See you on October 29.”

“Jake Paul continues to take on challenges that other professional fighters at his experience level and popularity never have,” said Nakisa Bidarian, co-founder MVP. “Jake appreciates the platform that he has and always aims to provide fans with a compelling product that drives engagement. Anderson Silva is unequivocally the most exciting striker in UFC history. Those abilities have translated into his professional boxing career, and he most certainly has the ability to end Jake’s unbeaten streak. It’s an honor for Most Valuable Promotions to have one of the GOATs of combat sports headline our event. He is already a Hall of Famer in our books.”

The two fighters will go face-to-face for the first time during back-to-back press events on Monday, September 12 in Los Angeles and on Tuesday, September 13 in Phoenix. Paul, who has done inspiring charity work with his Boxing Bullies foundation, is looking forward to supporting boys and girls in the Phoenix Metropolitan Area. «I am excited to bring this massive event to Phoenix and give back to the local community through my Boxing Bullies foundation,” said Paul.

After establishing himself as an all-time great in MMA from 1997 to 2020, Silva has continued to impress with his latest boxing run. He most recently knocked out fellow MMA legend Tito Ortiz in 81 seconds in September 2021 with a huge counter-right hand followed by a left to move his boxing record to three wins, one loss, with two wins by knockout. That followed his dazzling effort against Chavez, who entered their matchup with 58 fights and 34 knockouts and had gone toe-to-toe with some of boxing’s best – champions like Canelo Alvarez, Sergio Martinez and Danny Jacobs. It mattered little as Silva repeatedly let his hands go in combinations, displaying a fluency in the boxing ring that seemed to confound Chavez and doesn’t bode well for Paul. Silva’s only loss in boxing came in 1998 in his boxing debut.

The Sports Illustrated 2021 Breakout Boxer of the Year, Paul last fought December 2021 when he recorded one of the year’s most spectacular knockouts – a one -punch KO of former UFC champion Tyron Woodley in front of a sold-out crowd on SHOWTIME PPV. Paul next booked a fight with undefeated cruiserweight Tommy Fury, brother of heavyweight titleholder Tyson Fury, on August 6. However, Fury withdrew for the second time in eight months when he was denied entry into the United States.

Paul next secured a fight with Rahman Jr., a 12-1 heavyweight who is the son of former heavyweight champion Hasim Rahman. But the event was canceled when Rahman and his team indicated a week before the bout that they were unable to make the weight limit. In the weeks that followed, Paul and Most Valuable Promotions rescheduled three of the bouts from that event and agreed to pay the other undercard fighters 50 percent of their purse amounts.

The Paul vs. Silva event is co-produced by SHOWTIME PPV and Most Valuable Promotions (MVP), a company founded by Paul and Nakisa Bidarian. Holden Boxing will be the licensed promoter of the event, and Paul and Bidarian will serve as executive producers for the event. The pay-per-view telecast is produced and distributed by SHOWTIME PPV.