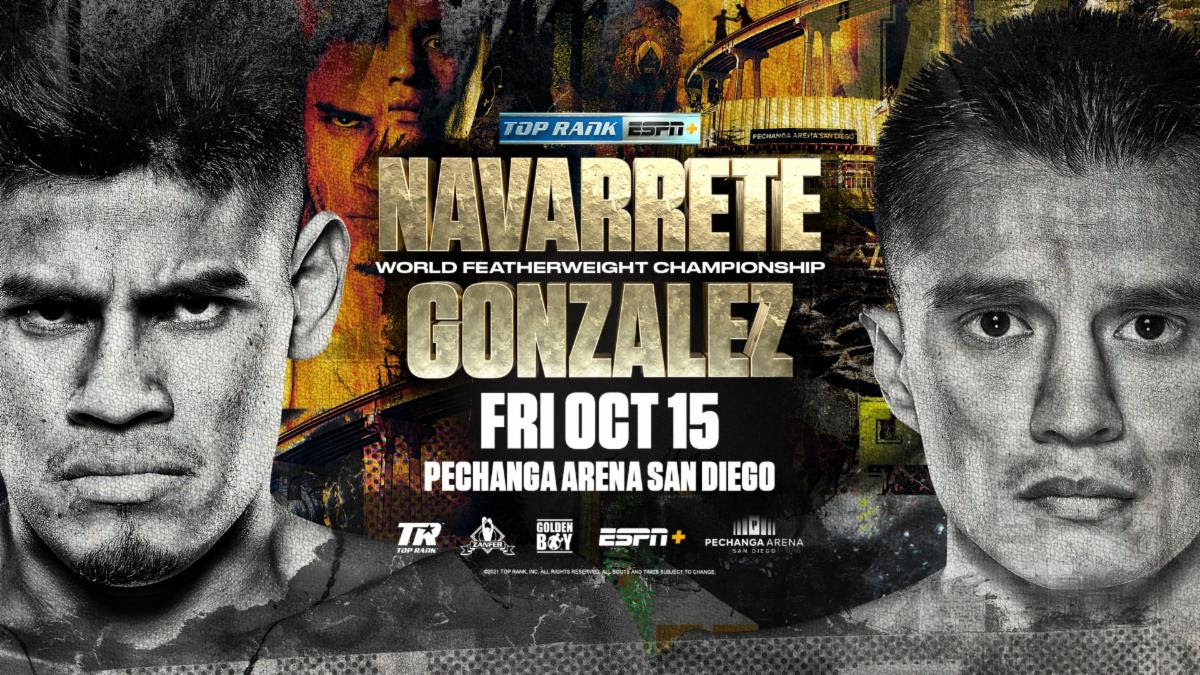 JOET GONZALEZ TO CHALLENGE EMANUEL NAVARRETE FOR THE WBO FEATHERWEIGHT WORLD TITLE
OCTOBER 15 AT PECHANGA ARENA SAN DIEGO
SAN DIEGO (September 14, 2021) — WBO Featherweight World title mandatory challenger, Joet Gonzalez, is set to face Emanuel Navarrette for the world title crown on Friday, Oct. 15 at Pechanga Arena San Diego. The 12-round world championship fight will stream live on ESPN+ at approximately 11:30 p.m. ET/8:30 p.m. PT.
Gonzalez (24-1, 14 KOs) was last seen in the ring defeating three-time world title challenger Miguel Marriaga at the Bubble at the MGM Grand, on September 12, 2020. The victory earned him the WBO International Featherweight Title and the WBO’s No. 1 featherweight ranking. Gonzalez’, first world title opportunity for the WBO Featherweight World Title came in October 2019, in a battle against fellow unbeaten featherweight Shakur Stevenson for the then vacant world championship. Losing by unanimous decision, Gonzalez is ready to redeem himself and claim the world championship when he faces Navarrette on October 15.
Navarrete (34-1, 29 KOs) is 8-0 with six knockouts in world title fights, a busy championship run that began in December 2018 with his dominant decision over Isaac Dogboe to win the WBO junior featherweight world title. Following five title defenses in nine months, Navarrete moved up to featherweight and bested Ruben Villa by unanimous decision last October to win the WBO world title. He defended that title in April and knocked out Christopher Diaz in the 12th round.
“I am excited and thankful to receive a second world title opportunity, this time against a great Mexican warrior like Navarrete. I know I have what it takes to become a world champion, and I will show the world that on Oct. 15. No disrespect to Navarrete, but this is my time,” said Gonzalez.
«I am focused on winning this fight and defending my world title for the second time. I know that Joet Gonzalez is a good fighter. I respect him and he is also my mandatory challenger, but I am the champion, and I will show him why. This belt isn’t going anywhere,” Navarrete said. «I hope that my Mexican fans will support me in San Diego, and my fans from Tijuana can also come to the fight. I will give them a great fight, and it will be a great victory for all my Mexican people.»
Navarrete-Gonzalez will stream live and exclusively on ESPN+ starting at approximately 11:30 p.m. ET/8:30 p.m. PT.  The fight is promoted by Top Rank, in association with Golden Boy Promotions.  Tickets starting at $55 go on sale Wednesday, Sept. 15 at 10 a.m. PT and can be purchased by visiting AXS.com.
About ESPN+
ESPN+ is the industry-leading sports streaming service that offers fans in the U.S. thousands of live sports events, original programming not available on ESPN’s linear TV or digital networks and exclusive editorial content from dozens of ESPN writers and reporters. Launched in April 2018, ESPN+ has grown to more than 14.9 million subscribers.
Fans sign up to ESPN+ for just $6.99 a month (or $69.99 per year) at ESPN.com, ESPNplus.com or on the ESPN App (mobile and connected devices). It is also available as part of The Disney Bundle that gives subscribers access to Disney+, ESPN+ and Hulu for $13.99/month (Hulu w/ads) or $19.99/month (Hulu w/o ads).