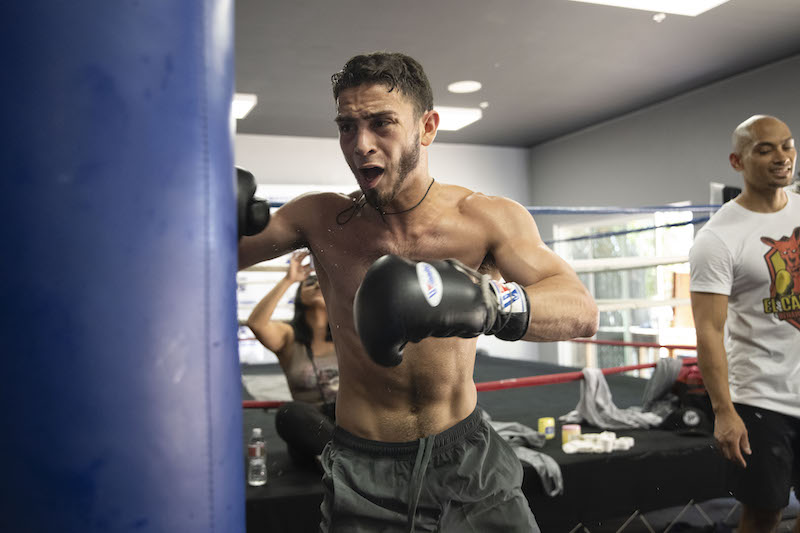 Photos by Lina Baker@seeyouringside
(Rancho Santa Fe, CA – April 7, 2022) – At one week before the fight that will take Jose “Rayo” Valenzuela (11-0, 7 KOs) from rising prospect to contender, Team Valenzuela holds a media workout before they head out to Dallas, TX to face Former WBC Super Featherweight Champion, Francisco “El Bandido” Vargas (27-3-2, 19 KOs) on the Spence vs. Ugas undercard for the vacant WBC Lightweight Continental Americas Title. #SpenceUgas will be held at AT&T Stadium and is brought to you by TGB Promotions LIVE on Showtime Boxing PPV.
Rayo Valenzuela looked stronger than ever and knows the importance of facing a veteran warrior like Francisco Vargas. Below, quotes from Valenzuela and head trainer Jose Benavidez Sr.:
QUOTES FROM JOSE “RAYO” VALENZUELA
“I train hard every fight, but this fight is important to me because I know it’s the fight that will take me to the next level of my career. My ultimate goal is to become a World Champion, for that I know I have to face tougher competition and Champions like Bandido Vargas. I’m ready for it, ready to face everyone I need to face to get where I want to be.”
“Training alongside my stablemates David (Benavidez) and Diego (Pacheco), makes me even go harder in camp. Here at the Fight house we do nothing but train, eat and sleep. I feel strong, weight is good, environment is perfect. Coach Jose has us on a strict traning schedule and no excuses. We work hard and help each other out. I’ve had strong sparring partners that have helped me throughout camp. I’m just ready to get in the ring.”
“April 16th will mark the day I go from prospect to contender. Remember that, because after that, I’m working my way up to become a World Champion. I’m looking to steal the show that night so don’t miss my fight, LIVE on Showtime!”
QUOTES FROM JOSE BENAVIDEZ SR.
“Rayo (Valenzuela) is a whole different animal now. I’ve taken him under my wing since he was an Amateur and the way he has evolved is incredible. He puts in the hard work, he knows what it takes to become a World Champion by watching David (Benavidez) and Jose Jr. (Benavidez). Rayo is going to get as far as he wants, he has it in him, he just has to put in the work in the gym, which he does and win the fights.”
“I know we are facing a warrior in Bandido Vargas, he’s a beast, Former Champion and has a lot of experience. It won’t be an easy fight, but I know Rayo (Valenzuela) put the work in the gym and more. He’s in shape, strong physically and mentally, I believe in my fighter and know he will put on a show April 16th.”
“I’m very proud of Rayo, his work ethic is unbelievable, his charisma, personality. I’m excited to see what the future holds for him. For now, April 16th stay tuned and make sure to watch Rayo become WBC Lightweight Continental Americas Champion LIVE on Showtime.”
Follow Jose “Rayo” Valenzuela and Jose Benavidez Sr. on Instagram
@rayoboxing