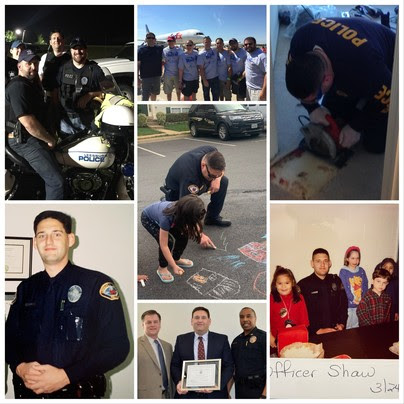 Lieutenant Shaw throughout the Years

Leesburg, VA – We would like to congratulate Lieutenant Doug Shaw on his retirement from the Leesburg Police Department after providing more than 24 years of public service to the Town.

Lieutenant Shaw was hired by the Leesburg Police Department on August 25, 1997. While a member of the department, Lieutenant Shaw has served in numerous specialized positions and roles in which he demonstrated outstanding commitment and dedication to serving the Leesburg community. Some of those roles have included patrol supervisor, negotiator, major crimes detective, and field training officer. When asked about his career, Lieutenant Shaw advised that he is most proud of the positive relationships that he has built over the years with crime victims and family members of crime victims.

In 2009, then Detective Shaw was part of the Department’s Crisis Intervention Team and served as the primary negotiator for more than seven hours after a failed attempted armed robbery turned into a hostage barricade involving two elderly hostages. Detective Shaw was effectively able to utilize his communication skills and negotiations training to bring about the release of two hostages and the peaceful surrender of an armed and dangerous felon. For his actions that day, he was awarded both a Unit Citation and a Certificate of Valor at the Loudoun Valor Awards.

In 2010, then Detective Shaw and other members of LPD were recognized with a Unit Citation at the Loudoun Valor Awards for their outstanding coordination and investigative efforts in connecting the dots to identify and aid in the apprehension of a violent, multi-state serial killer, following a series of stabbings that occurred in Leesburg in August of that year. The investigative team worked tirelessly and effectively to bring the perpetrator to justice and to keep Leesburg safe.

Additionally, throughout his career Lieutenant Shaw has been awarded multiple Commander’s Awards, Officer of the Quarter Awards, and SPOT Awards for his professional conduct, as well as for his excellence in community policing and public safety.

In his free time, Lieutenant Shaw enjoys spending time with his family. In retirement, he looks forward to travelling more.

Doug, on behalf of Chief Brown and your LPD Family, thank you for all that you have done over the past two and a half decades to better our community!