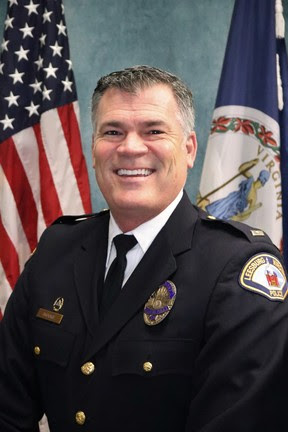 Leesburg, VA – We would like to congratulate Lieutenant T.J. Moore on his retirement from the Leesburg Police Department after providing more than 25 years of public service to the Town.

Over the past 25 years, Lt. Moore has been awarded several Commander’s Awards, a Bronze Medal of Valor, a Unit Citation Medal, and a Life Saving Medal. Additionally, over the years, the Leesburg Police Department has received numerous letters of thanks from the public, from Town employees, and from our law enforcement partners for the positive interactions that they each have had with Lieutenant Moore.

Lieutenant Moore is most proud of the friendships and bonds that he has made during his many interactions as a Community Policing Officer and as a partner. “These relationships and friendships, some over 20 years old, continue to this day and I consider them all family. I will cherish them forever,” advised Lieutenant Moore.

In retirement, Lieutenant Moore looks forward to the next chapter of his life with his family.

T.J., on behalf of Chief Brown and your LPD Family, thank you for all that you have done over the past two and a half decades to better our community!