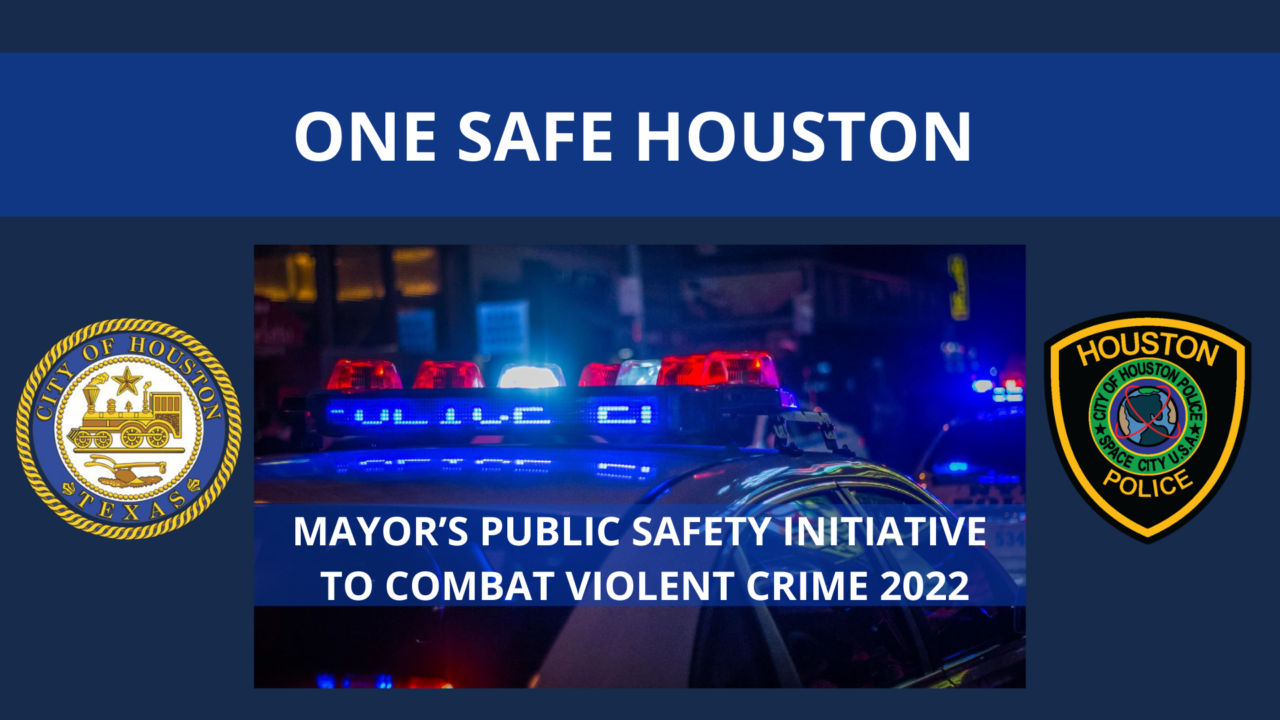 The plan outlines a commitment to put more officers on the streets through overtime and cadet classes and creates a $1 million gun buyback program. It also provides $1.5 million in additional funding to the Houston Forensic Science Center to address backlogs and funds domestic violence programs with an additional $3 million to provide more services for survivors and prevention efforts.

«This plan represents a holistic approach to combatting violent crime on the streets while being responsive to the needs of victims and building healthier communities in the process,» said Mayor Turner. «Law enforcement efforts alone will not sufficiently address the symptoms of crime. We are faced with a public health crisis, and it will require all of us, working together to overcome it.»

«This is a comprehensive approach to lowering the crime rate that focuses on police initiatives and touches on the true causes of violent crime such as social issues. I am grateful that Mayor Turner is committing not just to HPD but also to social service agencies in our city.»

I want to thank everyone for joining us today for an announcement that addresses violent crime in our City.  We have sought input from council members, community leaders and Crime Stoppers.
Joining me today as speakers are

The City of Houston, like most major cities across the country, is experiencing a surge in violent crime. There are no easy answers and no singular initiative standing by itself that adequately addressing rising crime. but the impact of the COVID-19 pandemic cannot be ignored and requires a holistic and comprehensive approach and strategy.
Other factors contributing to the nationwide spike in violent crime include widespread social anxiety, economic uncertainty, mental health concerns, the increased presence of illegally owned firearms, and a strained court system plagued by criminal case backlogs that impact the pretrial release and prosecution of violent offenders.

As your mayor,  is my responsibility to focus on the City of Houston.
Last year, the city launched a Violent Crime Initiative that resulted in the reduction of crime in many identified hot spots.  By the end of the initiative, all violent crime categories were reduced except homicide.
Unfortunately, the increase in homicides during the first month of 2022 including assaults on police officers and citizens is a sobering reminder that we must collectively strive for excellence as a community to combat our increasing crime challenges.

Houstonians, it is time to take our city back.
Every Houstonian deserves to feel safe. Safe at home, safe at work, safe while driving down the street, safe while shopping and safe with their families in our parks.
Since the beginning of the year, our city has felt anything but safe. At times, we have felt like a city under siege because of a violent crime wave that is sweeping across the country and impacting us in Houston.

Let’s be clear: Violent Crime is a public health crisis made worse by the pandemic and too many guns on our streets. Domestic violence cases have more than doubled since 2019 and more people are experiencing mental health distress …. leading to interactions with police resulting in dangerous or deadly outcomes.

Last week, three Houston police officers were shot and wounded by a suspect carrying a  “fully automatic” weapon, who fired multiple rounds in a busy neighborhood. The gunman, who was wanted on a felony warrant at the time of the shooting, was not concerned about the lives of law enforcement or the families living nearby.
It is understandable that many in our community are frightened and outraged because these violent crimes shock the conscious of our city and shake the foundation of a city that is known as a safe place to live, work and raise a family.

As I said at on the day the three officers were shot last week, we are living in inherently dangerous time. And it’s going to take all of us working together to keep our city safe.
Police officers cannot do it alone and it is important that we give them the tools to work with and join them in creating a comprehensive and holistic approach to combat violent crime.
To realize this vision, we are launching the One Safe Houston crime reduction initiative, which focuses on four (4) key areas: