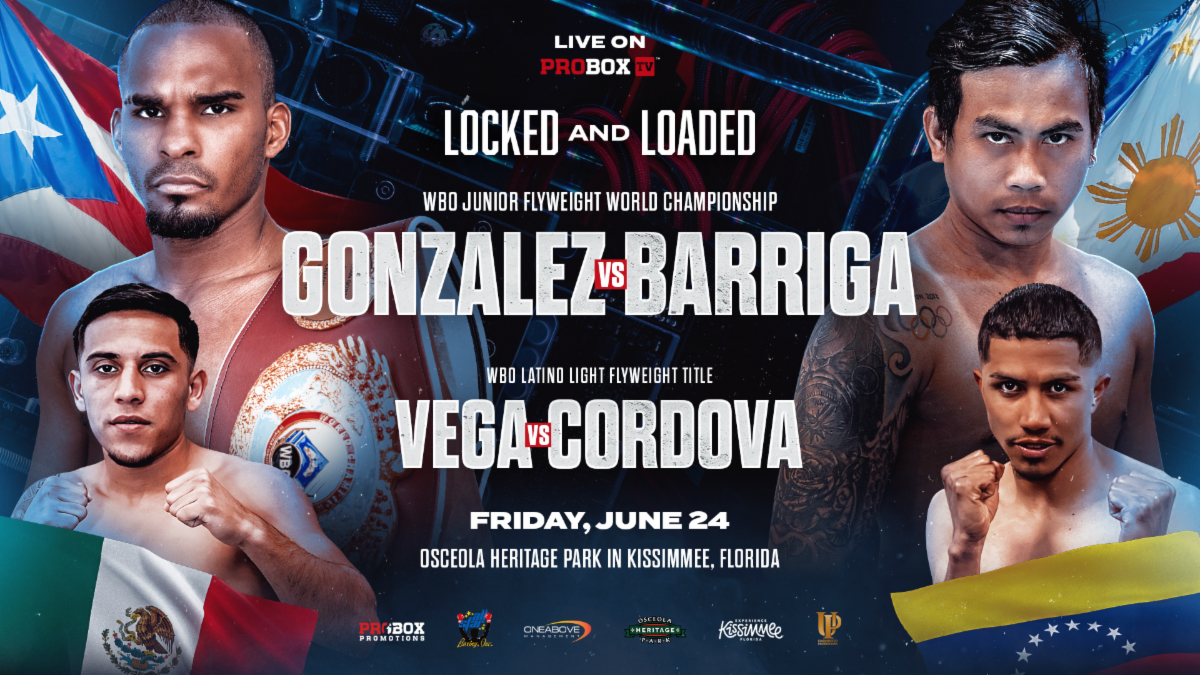 MEXICAN CONTENDER AXEL ‘MINI’ VEGA FACES VENEZUELAN PUNCHER ANGELINO ‘HURACAN’ CORDOVA IN CO-MAIN EVENT OF ‘BOMBA’ GONZALEZ VS. ‘DA BABY BOY’ BARRIGA
FRIDAY, JUNE 24 AT OSCEOLA HERITAGE PARK IN KISSIMMEE, FLORIDA AND STREAMED LIVE GLOBALLY ON PROBOX TV
Learn More about ProBox TV
Purchase Tickets
KISSIMMEE, Florida (June 6, 2022): Former world title challenger Axel “Mini” Vega (15-4-1, 8 KOs) returns to the ring to take on undefeated Venezuelan knockout artist Angelino “Huracan” Cordova (16-0-1, 12 KOs) in the co-main event of “Bomba” Gonzalez vs. “Da Baby Boy” Barriga. The 10-round fight, which will be for the WBO Latino Junior Flyweight Title, tops off a stacked undercard of rising prospects that will be announced shortly.
The event takes place on Friday, June 24 at Osceola Heritage Park in Kissimmee, Florida and will be streamed live on ProBox TV beginning at 7:30 p.m. ET/4:30 p.m. PT.
Vega is a 22-year-old contender of Mexico City, Mexico who debuted as a professional in October 2016. After only three years, Vega earned his first world title opportunity in a rematch against Wilfredo Mendez for the WBO Minimumweight World Title. Though unsuccessful, Vega would get another title opportunity in 2021 at 108 pounds against WBA champion Hiroto Kyoguchi. Vega came up short in that fight, but returned quickly that year with a 10-round decision win over Armando Torres. With two title opportunities under his belt, Vega is prepared to make another run, but first he needs to get past a hard-hitting puncher.
Cordova is a native of Ciudad Bolivar, Venezuela who has developed a 70% knockout ratio across 17 professional fights. The 26-year-old has never fought outside of his home country, but he’s ready to make his United States debut on one of the biggest stages in the world.