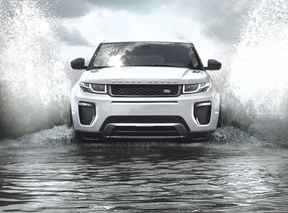 If it ain’t broken, don’t fix it. That’s certainly the philosophy Land Rover has applied to the new Evoque. Only now, almost five years since the baby Range Rover was first launched, has the brand decided to update it. But don’t think Land Rover has got lazy or run out of ideas – far from it; the simple fact is that it can barely produce enough Evoques to satisfy demand. This is the firm’s fastest-selling model ever, so clearly, there is little reason for change.

From the outside, you’ll struggle to identify any tweaks. Land Rover isn’t even calling this a facelift, simply a “Model Year update for 2016”. Look close enough, and you’ll notice mildly reshaped front and rear bumpers, plus an altered grille and fresh headlights, while new seats and materials on the dash and doors have been added. Even so, the Evoque hasn’t aged one bit – this nip and tuck merely strengthens its kerb appeal.

Instead, the biggest changes have come directly from customer feedback, with refinement improvements and cleaner engines on their wish lists. Happily, JLR has just the tool for the job, which should be able to address both criticisms in one fell swoop. Under the bonnet, Land Rover has fitted the new 2.0-litre Ingenium diesel engine from the larger Discovery Sport. As in its sibling, it’s offered in two states of tune – 148bhp or 178bhp – while the 236bhp 2.0-litre petrol remains an option.

As you’d expect, four-wheel drive is available, while a nine-speed auto and six-speed manual are the gearbox options. In terms of running costs, the updated Evoque is now 18 per cent more fuel-efficient than before, claiming 67.3mpg economy and 109g/km CO2 emissions for the most frugal model in the range – greener than the previous best of 55.6mpg and 133g/km.

Our test car is the new eco e-Capability version, which you’ll have to pick if you want rock-bottom running costs – yet the five-door body does have a slightly negative effect on economy. Those figures have been achieved by fitting the less powerful 148bhp engine paired with a six-speed manual box, sending power to the front wheels only.

As we discovered in the Discovery Sport, pressing the starter button reveals a far less intrusive engine note than you had to put up with in the old 2.2 diesel. There was never a shortage of power, with 187bhp on tap, but that grunt did come at the expense of refinement. The new Ingenium diesel resolves most of the issue, significantly reducing vibrations through the steering wheel and pedals. And once up to temperature, it’s far more muted at idle.

Power delivery is noticeably smoother, too, although venture beyond 3,000rpm, and the engine does begin to feel a little breathless. Perhaps that’s reflected in the laborious 11.2-second sprint from 0-62mph, yet the strong torque keeps you trundling along at sufficient pace.

Our test car rode on larger 19-inch wheels – 18s are standard – and they provide a comfortable ride, but they did tend to sniff out more prominent road imperfections. Still, the damping and body control help maintain composure.

If there’s a weakness, it’s the manual box. Changes are weighty and short, but both the Evoque and the new Ingenium engine work far slicker with JLR’s nine-speed auto. However, this transmission is only offered in combination with the 178bhp diesel and four-wheel drive, which adds a hefty £4,400 to the cost.

The expense can extend far beyond that, too. Updates to the Evoque have raised the starting price across the line-up by around £1,500 on average, with Land Rover asking as much as £51,800 for the range-topping Autobiography edition.

However, the brand has calculated the longer service intervals, improved economy and strong residual values of the new Evoque could save you up to £3,700 over three years of ownership.