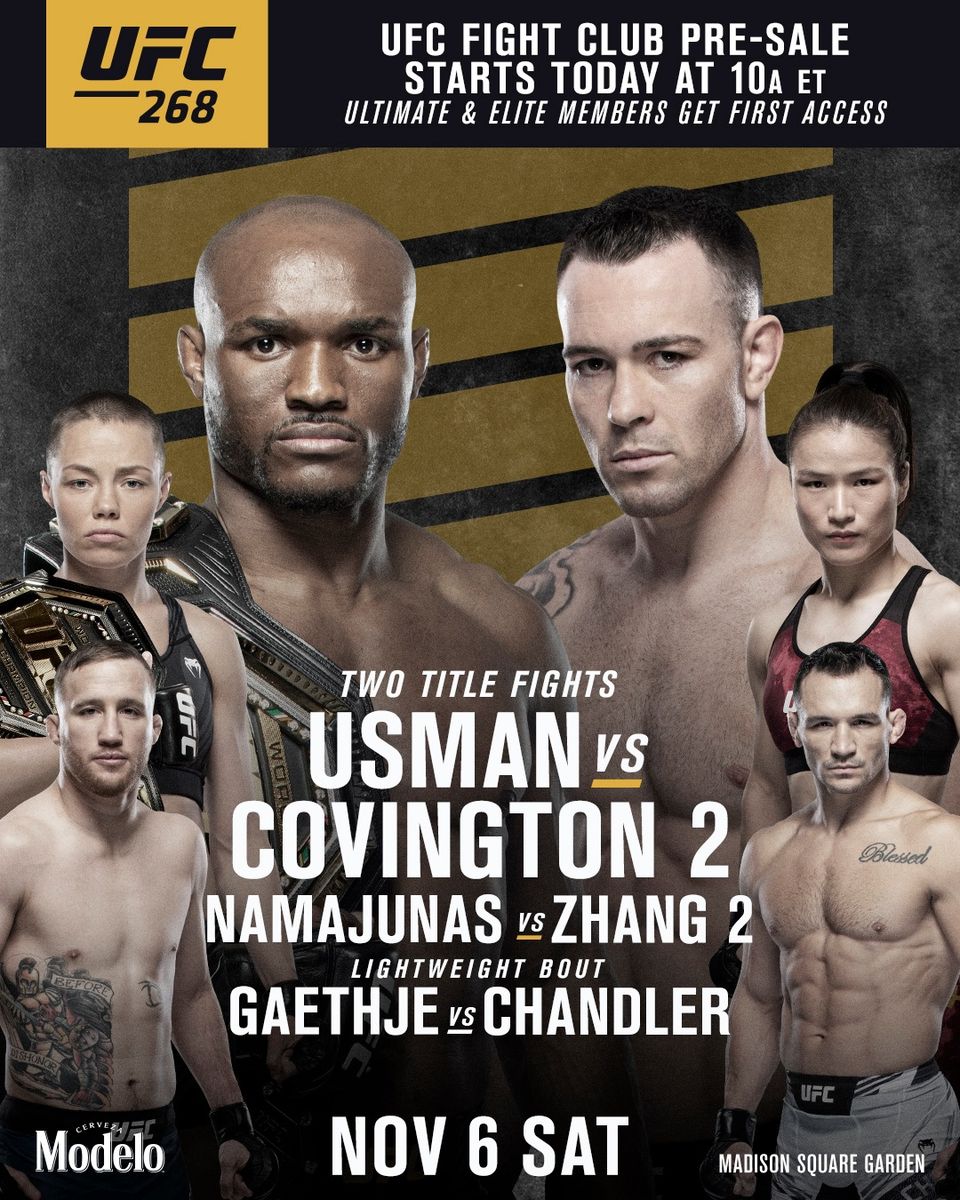 Las Vegas – UFC® returns to the world famous Madison Square Garden with a compelling pair of world championship rematches. Headlining the event will be UFC welterweight champion Kamaru Usman as he looks to defend his title once again against heated rival and No. 1 ranked contender Colby Covington. The co-main event will see UFC women’s strawweight champion Rose Najamunas aim to make it two in a row against former champion and No. 1 ranked contender Zhang Weili.

UFC® 268: USMAN vs. COVINGTON 2 will take place Saturday, Nov. 6 at Madison Square Garden in New York City, N.Y. All bouts will be simulcast on ESPN+ in English and Spanish beginning at 6:15 p.m. ET/3:15 p.m. PT with the ESPN+ and UFC Fight Pass prelims. The prelims will continue exclusively on ESPNews, ESPN Deportes & ESPN+ at 8 p.m. ET/5 p.m. PT followed by the ESPN+ Pay-Per-View main card that will kick off at 10 p.m. ET/7 p.m. PT.

Usman (19-1, fighting out of Dallas, Texas by way of Auchi, Nigeria) intends to maintain his dominant reign over the welterweight division and make the case that he is the No. 1 pound-for-pound fighter in the world. Undefeated in the UFC, he is currently on the longest active win streak at 170 pounds with 14 victories in a row, including Jorge Masvidal (twice), Tyron Woodley and Rafael Dos Anjos. Usman now has his sights set on vanquishing Covington once and for all and continuing his quest to become the greatest welterweight of all time.

Former interim UFC welterweight champion Covington (15-2, fighting out of Miami, Fla.) seeks to finally clinch the undisputed title with a statement performance. One of the most prolific wrestlers in welterweight history, he has secured victories over former UFC champions Tyron Woodley, Robbie Lawler and Rafael Dos Anjos. Covington now looks to prove that he has what it takes to upset Usman and begin his championship legacy.

Fan favorite Namajunas (11-4, fighting out of Denver, Colo.) competes for the second time in a year for the first time since 2017 and aims to leave no doubt with another triumph over Zhang. Namajunas, the No. 3 ranked women’s pound-for-pound fighter, holds the strawweight record for most wins by stoppage, including victories over Joanna Jedrzejczyk, Michelle Waterson and Paige VanZant. She now plans to make her second run as champion a historic one and establish herself as the greatest strawweight of all time.

Zhang (21-2, fighting out of Beijing, China) intends to make the most of her title rematch opportunity and show that she is the best strawweight in the world. The first Chinese champion in UFC history, Zhang rose to prominence with notable victories Jessica Andrade and Jessica Aguilar, as well as her 2020 Fight of the Year against former champion Joanna Jedrzejczyk. She now hopes to deliver an awe-inspiring performance and begin building another impressive win streak.

Additional bouts on the card include:

Visit the UFC.com for information and content to support your UFC coverage. Please click here to apply for the event.