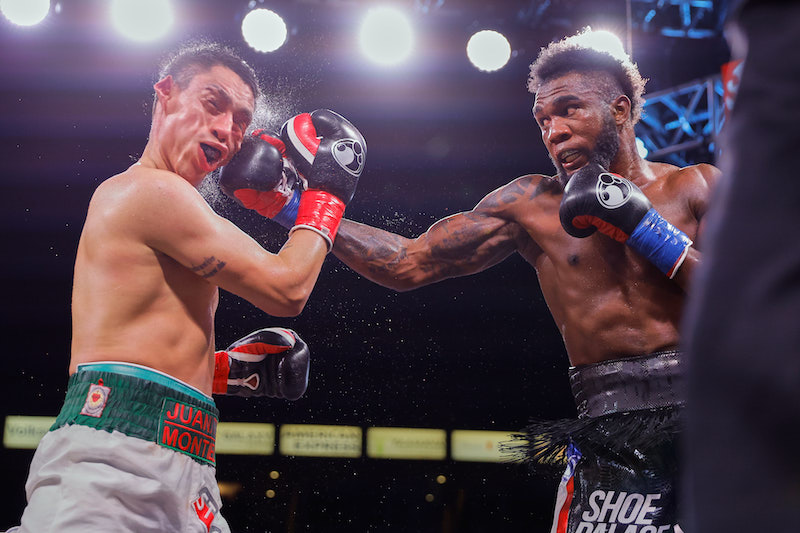 Fundora (20-0-1, 13 KOs), of Coachella, Calif., fresh off a victory over Erickson Lubin in a potential 2022 Fight of the Year in April, showed off his noted ability to fight on the inside while also flashing an improved jab against a  competitive Ocampo (34-2, 22 KOs), who rode a 12-fight winning streak into the bout.

“I thought I would show a little boxing and put that on display but you know I still had to bang for the fans,» said Fundora, who won by scores  of 119-109, 118-110 and 117-111. «That’s what they came here for, so I had to give it to them. I felt my jab was solid and the difference and had him backing up. You know I like to break my opponent down and he was very tough. I am pleased with this performance because I did what we trained for. I trained for boxing and I trained to stay at a distance and I think we did that in the fight.”

The six-foot-six-inch Fundora used his height to his advantage in the early rounds, throwing over 170 jabs in the first three frames. Ocampo showed his mettle and went punch for punch with Fundora early, having success with hooks to the body and by finishing combos with left hooks to the head.

“I never felt like he hurt me,” said Ocampo. “It was a tough fight, and Fundora was a quality opponent. If I could get a rematch, I’d train even harder to knock him out next time. My message to everyone in Mexico is that Ocampo is here to stay.”

In round four, the fight turned into a toe-to-toe battle of attrition, as Fundora pushed forward and winged strong shots on the inside. Ocampo was able to stay on his feet, but had multiple moments where he looked weary and like the end might be near. Ocampo was able to almost go punch for punch with Fundora throughout the 12 rounds throwing 869 shots to Fundora’s 871, but it was Fundora who owned the 259 to 192 edge in punches landed.

«He’s a tough Mexican,” said Fundora. “My hat’s off to him. In the middle I wanted to see if I could hurt him. I know Errol Spence Jr. caught him with a body shot and I saw in the middle of the fight he was open for the left uppercut to the stomach so I saw that would slow him down.»

Fundora showed savvy beyond his years in the championship rounds, switching back to a focus on the jab as he cruised through the final two stanzas to earn his unanimous decision.. After the fight, Fundora expressed his hope that his next bout would be for the undisputed super welterweight world championship, currently held by Jermell Charlo.

“I’m the WBC mandatory,” said Fundora. “I’ve earned my spot and we’ll see what happens. But I hope I’m next. Fingers crossed.”

“I think I’m No. 1 at middleweight and let’s hope the big names of the division have the courage to face me now,” said a jovial Adames post fight.

After a patient start that saw the southpaw Adames lean on his jab and body work in rounds one and two, Adames came out in round three throwing the big shots that have established him as a contender. Montiel, who had previously gone the distance in challenging WBC Middleweight World Champion Jermall Charlo, was willing to do his part and throw heavy shots of his own, delighting the excitable crowd.

After a back and forth first minute of the third, Adames took full control of the round with a series of hooks that stunned and wobbled Montiel. Perhaps unwisely, Montiel remained on his feet, which allowed Adames to continue the onslaught that led to a 45 to 9 edge in punches landed in round three. Eventually, the punishment was deemed too much by referee Ray Corona, who officially waived off the bout 2:37 into the round with Montiel on his feet.

“No excuses, he was better than me and I lost,” said Montiel. “I’m going to recover from this and I’m going to come back better and stronger. The people in Mexico should all know that.”

“The referee did his job,” said Adames. “I’m a strong fighter and if I had hit him again, I would have really hurt him. He’s a young guy and he still has a career ahead of him in boxing. I knew once I connected on that right hand that it was over and he didn’t have much left and then I went in for the kill. He was done at that point and I went on the attack. His face tells you everything.”

“I’m ready for the best of the division, for not just Jermall Charlo, but for all the champions there,” said Adames. “I want to face them and beat them. I’m happy for my country and for the people and the fans who came out to see me. I’m happy for my province in the Dominican Republic. They’re very happy for my victory and for my performance tonight.”

In the telecast opener, Argentina’s Fernando Martinez (15-0, 8 KOs) retained his IBF Junior Bantamweight World Championship with a hard-fought unanimous decision over former champion Jerwin Ancajas (33-3-2, 22 KOs) in their 12-round rematch.

“This was about validating the first fight,” said Martinez. “I trained very hard for this fight. I have a lot of people to thank, but most importantly this is for my dad up in heaven. It’s definitely harder to maintain the hunger and retain the title, but now we’re going after ‘Chocolatito’ Gonzalez and everyone else in the division who’s in my way.”

After winning the title from the then longtime champion Ancajas in February on SHOWTIME, Martinez repeated the feat Saturday night by out landing his opponent in seven of the final eight rounds. With his promoter and former world champion Marcos Maidana ringside, Martinez put on a performance worthy of his idol, landing 241 shots to Ancajas’ 185, for a 36% connect rate.

After what appeared to be an even start, with both fighters landing 71 punches in rounds one through five, Martinez began to put combinations together and land multiple power shots on Ancajas with each flurry. While Ancajas was able to occasionally hold effectively and land counters of his own, he was unable to hurt his hard-charging opponent, despite out throwing him (785-674).

Martinez rode an impressive 38% connect rate on power punches to pull away in the fight and snuff out any hope of an Ancajas comeback on the cards or via KO. After 12 rounds of lively action, Martinez earned the decision on all three cards, with tallies of 119-109 and 118-110 twice.

“My record shows that I’m a champion but it doesn’t show the intensity that I have in my fights,” said Martinez. “Now I can buy the house that my mother needs.”