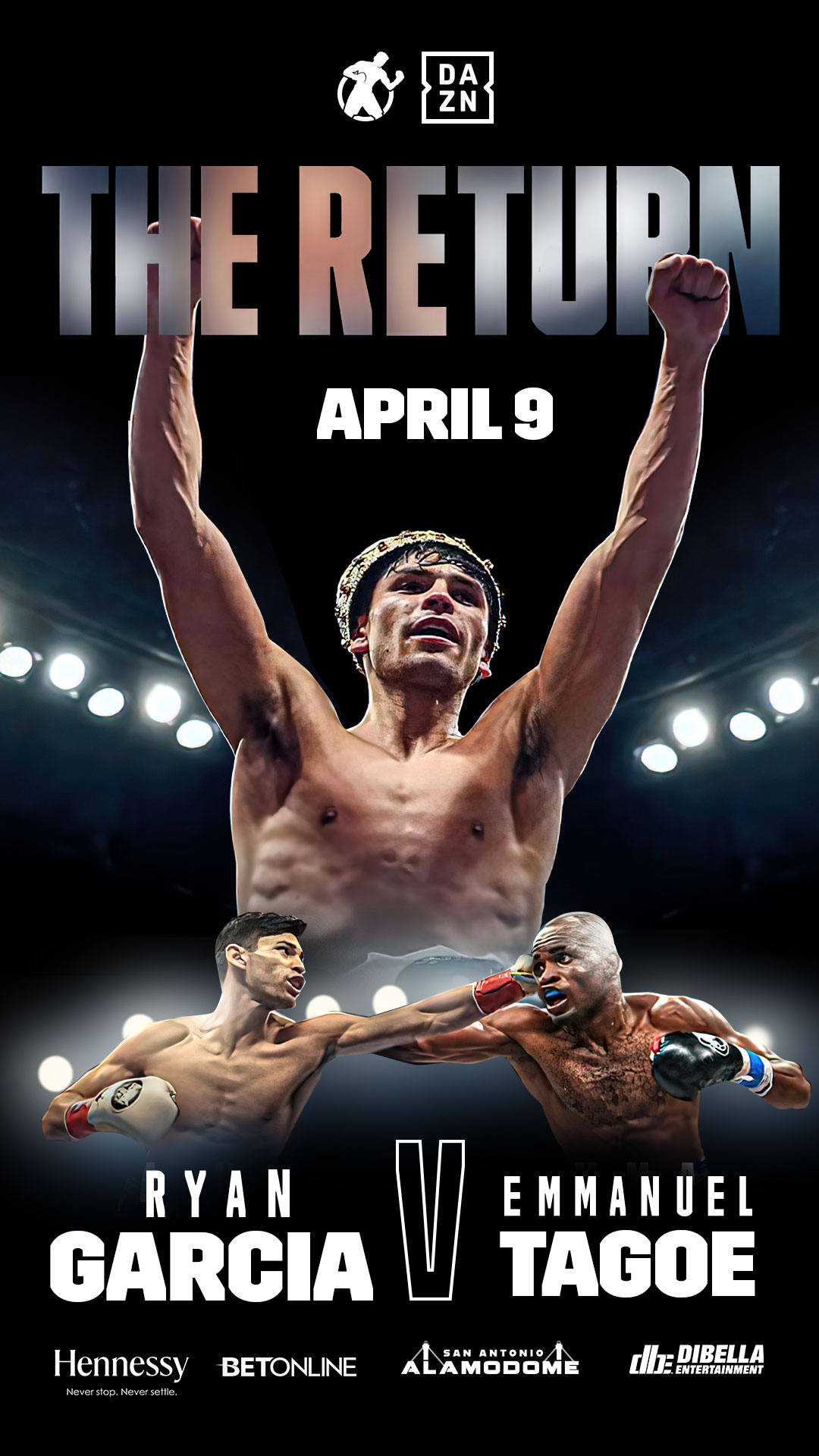 SHOWDOWN AT THE ALAMODOME
RYAN “KING RY” GARCIA MAKES HIS GRAND RETURN TO THE RING AGAINST EMMANUEL “THE GAMEBOY” TAGOE
LIVE SATURDAY, APRIL 9TH, FROM SAN ANTONIO’S ALAMODOME, EXCLUSIVELY ON DAZN
Tickets on Sale March 1st at 10:00a.m CT!
SAN ANTONIO, TX (February 25, 2022) – The undefeated, lighting fast Ryan “King Ry” Garcia (21-0, 18KOs) of Victorville, CA, makes his grand return to the ring on Saturday, April 9th, against Accra, Ghana’s Emmanuel “The Gameboy” Tagoe (32-1, 15KOs). The 12-round, lightweight Texas showdown will take place at San Antonio’s historic Alamodome on Saturday, April 9th, and will be streamed live worldwide on DAZN.
Tickets for Garcia vs. Tagoe go on sale Tuesday, March 1st at 10:00 a.m. CT and are priced at $250, $150, $100, $75, and $40, not including applicable facility fees. Tickets will be available for purchase at Ticketmaster.com or in-person at the Alamodome Box Office, Monday through Friday, from 10:00 a.m. until 4:00 p.m. CT.
Fans have been awaiting the return of the boxing sensation, Ryan “King Ry” Garcia, a skilled, lightning-fast puncher who has steadily climbed the ranks of the lightweight division. A big win against Tagoe, a top ten contender, would propel Garcia to the top of the division. Garcia has defeated tough contenders like “Ruthless” Romero Duno, Francisco Fonseca, Carlos “The Solution” Morales, and Jason “La Maravilla” Velez. Garcia was last seen in a spectacular seventh-round stoppage of 2012 Olympic gold medalist, Luke Campbell.
“I am excited and motivated to be back in the ring finally. I’m ready to do something special and give the fans a show they will never forget,” said Ryan Garcia. “I always want to make sure I give all my fans something memorable every time I fight.”
Emmanuel “The Gameboy” Tagoe, from Accra, Ghana, has accumulated various titles since his professional debut in 2004, including the IBF International, WBA International, and WBO Africa lightweight titles. The 32-year-old is currently ranked #10 by the WBC in the lightweight division and has risen in the division’s ranks since his U.S. boxing debut in 2013 with a ninth-round stoppage of Gerardo Robles on ESPN2. His last outing came on November 27th, 2020, when Tagoe met former WBO NABO champion Mason Menard in a 10-round lightweight contest, defeating Menard via majority decision with scores of 98-82, 97-73, and 95-95.
“I have always wanted a fight against Ryan Garcia. It’s a dream come true for me to be the main event in such an important fight,” said Emmanuel Tagoe. “I am grateful to my manager, Peter Kahn, and promoter, Lou DiBella, for providing me with this opportunity. Thank you to Golden Boy Promotions for finally getting this fight done. This is the second time I will be fighting on DAZN, and I will use this opportunity to show myself off to the world. All of the pressure is on Ryan. I am going to make Ghana proud, and everyone will know who Emmanuel ‘Game Boy’ Tagoe is after April 9th in San Antonio.”
“Fans have been anticipating the grand return of Ryan Garcia to the ring,” said Oscar De La Hoya, Chairman, and CEO of Golden Boy. “Ryan has captivated the sport with his incredible speed and power, and on April 9th, fans will get to see a big Texas showdown at the historic Alamodome. Emmanuel Tagoe is a top 10 lightweight contender, so this will be a challenging fight for Ryan. I can guarantee that April 9th will be a night fans will remember as Ryan’s Grand Return to boxing.”
“It’s great for boxing that Ryan Garcia is returning to the ring and, after a significant layoff, Ryan is taking on a legitimate top ten contender,” said Lou DiBella, President of DiBella Entertainment. “Emmanuel Tagoe has won 32 fights in a row, is hungry, and is one of the top boxing talents from Ghana. A hungry Ghanaian contender is a dangerous opponent, and the world is going to see it on April 9th.”
“Ryan Garcia is fast becoming one of the biggest names in the sport, and we are thrilled to see him return April 9th against a very tough competitor in Emmanuel Tagoe,” said Ed Breeze, EVP Rights, DAZN. “Ryan has already made a huge statement in the highly competitive lightweight division, and we look forward to broadcasting this can’t-miss event live and exclusively worldwide as part of a completely stacked spring boxing schedule on DAZN.”
“We are excited to host this wonderful matchup and to welcome back Golden Boy Promotions to the City of San Antonio and the iconic Alamodome.” said Stephen Zito, General Manager of the Alamodome.
Garcia vs. Tagoe is a 12-round lightweight fight presented by Golden Boy in association with DiBella Entertainment. The event is sponsored by Hennessy “Never Stop. Never Settle,” and “BetOnline – Your Online Sportsbook Experts.” The fight will take place on Saturday, April 9th, and will stream live exclusively on DAZN, worldwide.