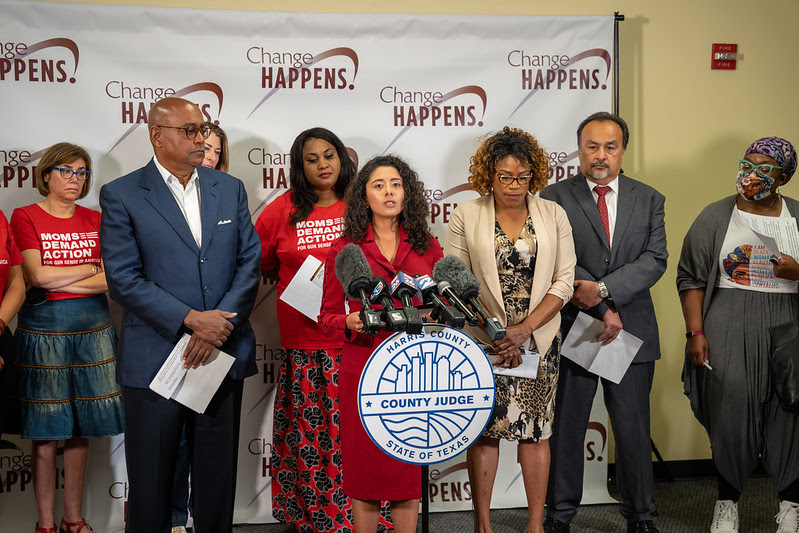 This June We Honor the Victims of Gun Violence

Over the past month, our nation has yet again endured violent deaths from mass shootings and gun violence. In Buffalo, we all witnessed the brutal attack driven by racism and hate that left 13 people dead at a grocery store. 17 people were shot during a mass shooting in downtown Milwaukee. And we are all still mourning the loss of two teachers and 19 innocent children murdered at Robb Elementary School in Uvalde. This violence shows no sign of letting up  – between May 24th, the day of the Uvalde tragedy, and June 6th, there have been 33 additional mass shootings, including multiple mass shootings here in Harris County. No one is immune from this bloody plague.

Today, our nation and our county is in the midst of a vital conversation about violent crime and what needs to be done to prevent it. The truth is, we cannot talk about addressing violent crime without talking about the role that guns play in fueling it. On the same day as the tragedy in Uvalde, we released new data from Harris County’s Institute for Forensic Sciences from which the conclusion could not be more clear – we are not just suffering from a rise in homicides, but also from a rise in the percentage of homicides caused by guns. In 2018, gunshot wounds caused 76% of homicides in Harris County. In 2021, that number was 84%. This year’s percentage is at 87%. And we aren’t unique. Statewide, the rate of gun homicides in Texas increased 90% between 2011 and 2020, from a little over 3 deaths per 100,000 people to about 6 deaths per 100,000.

You’d think after decades of enduring tragedy after tragedy, our nation and our state would have had enough and passed common sense gun safety laws to save lives. But no. Texas has actually moved in the opposite direction and eliminated some of the few common sense gun regulations we had. Last year our state legislature passed an extreme permitless carry law which makes it legal to carry a concealed weapon without training or a permit. And yet, polls show a broad coalition of Americans oppose permitless carry and support background checks and other common sense gun safety initiatives. The majority of Americans know that when it comes to fighting violent crime, keeping guns out of the hands of dangerous people is an essential part of the solution.

So we must continue fighting every way we can here at the County level. We’ve made historic investments to fund law enforcement and other smart-and-tough on crime initiatives in Harris County. Our $1.4 billion budget for justice and safety this year is bigger than any other time in Harris County history. We’re also investing in youth crime prevention initiatives and targeted enforcement in high crime micro-zones. We’re addressing blight and pushing to shrink our criminal court backlog. We’ve also worked with law enforcement and other anti-crime groups like Moms Demand Action to educate the community about how to store guns safely and distribute gun locks. And on the same day we lost 19 children and two teachers in Uvalde, Harris County Commissioner’s Court declared June Gun Violence Prevention Month in Harris County to honor victims of these senseless tragedies.

We’ll never stop pushing our state legislature and congress to do what is right – to act to stop our children, our family, our best friends, our neighbors from being murdered by weapons of war in schools, grocery stores, movie theaters, churches, or anywhere else you can imagine.