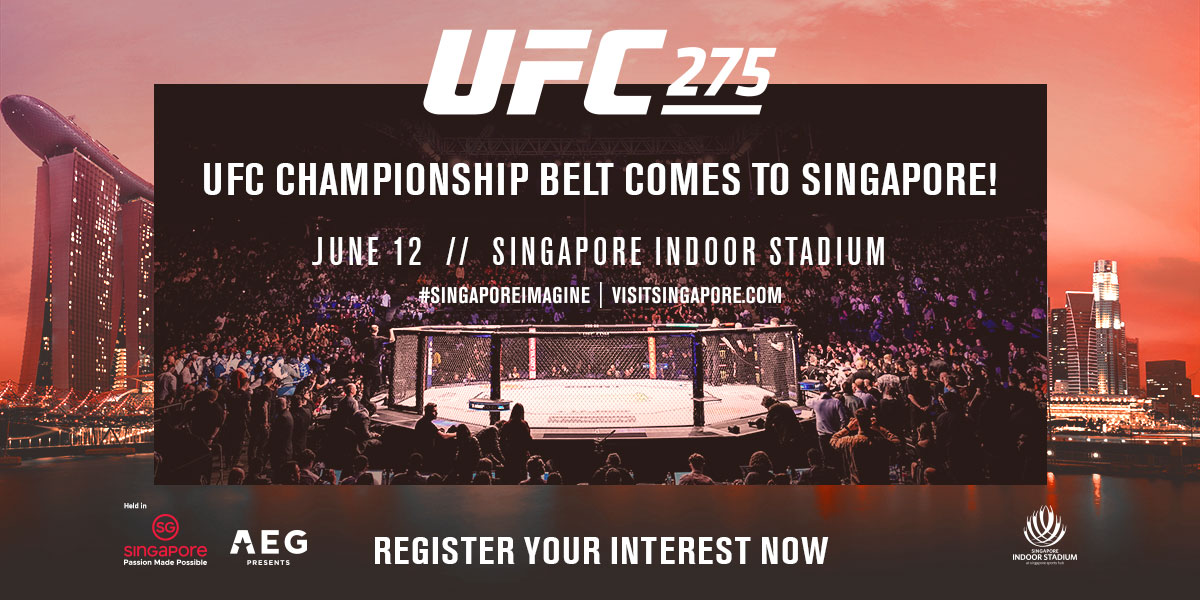 UFC® TO MAKE HISTORY IN SINGAPORE IN JUNE

UFC® 275: TEIXEIRA vs PROCHAZKA will be UFC’s fourth event hosted in Singapore with support from the Singapore Tourism Board (STB). In planning the return of live events in Asia, UFC selected Singapore because of its proven health and safety track record and its outstanding infrastructure across all components – both of which are key to ensuring the successful production of a premium international event.

UFC® 275: TEIXEIRA vs PROCHAZKA will place Singapore alongside other major international locations to hold multiple UFC events including Tokyo, London and New York City. The presentation of a numbered Pay-Per-View event to Southeast Asia signifies the development of UFC in the region and the mixed martial arts promotion’s remarkable global growth.

“I can’t wait for our first Pay-Per-View event in Singapore,” said UFC President Dana White. “The fights have been incredible this year and we’re going to deliver an absolutely stacked card for the amazing fans in Southeast Asia.”

“Singapore will be the very first city in Southeast Asia to host a PPV event and UFC 275 is going to be huge! Asia’s biggest stars will be featured on a top caliber card, and the jam-packed fight week will be one to remember,” said Kevin Chang, UFC Senior Vice President, Asia Pacific. “We are thankful for STB’s support for this historic event in Singapore that will proudly showcase this vibrant and dynamic city.”

“UFC 275 will be the first UFC numbered event in Asia after a decade, and its presence highlights Singapore’s position as a leading destination for sports in the region,» Ms Ong Ling Lee, Director, Sports and Wellness, Singapore Tourism Board. «It is also a timely boost to our vibrancy and attractiveness as a lifestyle destination, as more international visitors return to Singapore.”

Leading global live entertainment company AEG Presents has been appointed as the official promoter of UFC® 275: TEIXEIRA vs PROCHAZKA in Singapore.

“AEG is extremely proud to be associated with UFC to bring this marquee event to Singapore,» said Adam Wilkes, President and CEO, AEG Asia Pacific. «UFC 275 will be an amazing experience for fight fans and for those who love, and have missed, world class events.”

In the ultra-competitive light heavyweight division, UFC world champion Glover Teixeira (33-7, fighting out of Bethel, CT, USA by way of Governador Valadares, Brazil) will make his first title defense since winning the belt with a second-round submission of Jan Blachowicz at UFC 267. Standing across the Octagon will be first-time title contender Jiri Prochazka (28-3-1, fighting out of Hosteradice, Czechia) who earned his shot with back-to-back KOs of No. 7 Volkan Oezdamir in his UFC debut then No. 3 Dominick Reyes.

Additional bouts on the card include:

Additional bouts will be announced over the coming weeks.