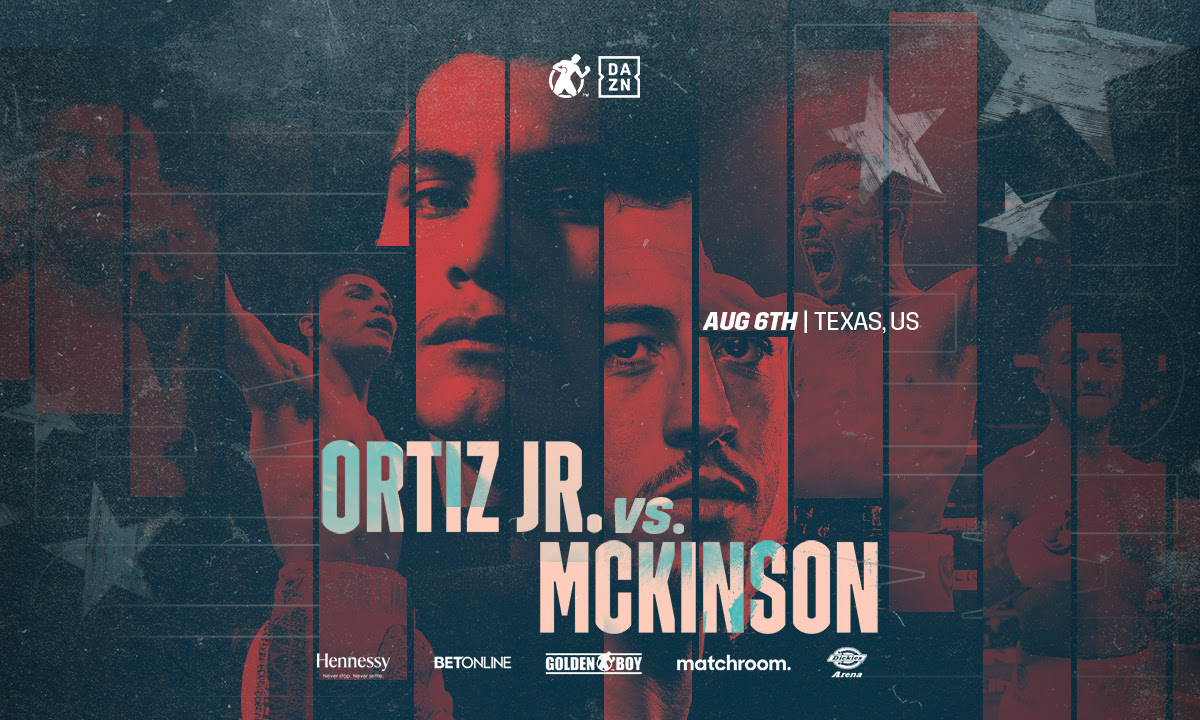 VERGIL ORTIZ, JR. VS. MICHAEL MCKINSON IS SET FOR SATURDAY, AUGUST 6 AT DICKIES ARENA IN FORT WORTH, TX
STREAMING LIVE WORLDWIDE ON DAZN
Tickets Go On Sale Tuesday, June 21st @ 8:00 a.m. PT / 10:00 a.m. CT / 11:00 a.m. ET
LOS ANGELES, CA (June 16, 2022): Knockout sensation and the pride of Grand Prairie, Texas, Vergil Ortiz Jr. (18-0, 18 KOs), will make his grand return to the ring on Saturday, August 6, taking on top 10 ranked, undefeated welterweight contender Michael “The Problem” McKinson (22-0, 2 KOs) of Portsmouth, Great Britain. The 12-round welterweight fight will take place at Dickies Arena in Fort Worth, Texas, and will stream live worldwide, exclusively on DAZN.
Tickets for Ortiz Jr. vs. McKinson go on sale Tuesday, June 21st at 8:00 a.m. PT / 10:00 a.m CT / 11:00 a.m. ET and are priced at $275, $137.50, $82.50 and $44 not including applicable service charges. Tickets will be available for purchase online at Ticketmaster.com, DickiesArena.com and GoldenBoyPromotions.com.
“I am very happy to be stepping back into the ring again,” said Vergil Ortiz, Jr. “I’m ready to show the world once again why I’m ready for a world title.”
“I’m getting what I deserve,” said Michael McKinson. “I was prepared to fight Ortiz, Jr. before; now, I have been given the opportunity again to prove I am the best in this division.”
“Vergil Ortiz, Jr. is the most exciting welterweight in the world,” said Oscar De La Hoya, Chairman and CEO. “We are happy that he is back, healthy, and feels 100%.  Fighting in his home state, I can’t think of a better way for him to make his comeback and put on another great performance for his fans.  He is one step away from challenging any world champion and he will prove it on August 6.”
“I am delighted that this fight has come back around for Mikey,” said Eddie Hearn, Chairman of Matchroom Boxing. “He suffered disappointment in March when Vergil was forced out of the fight, but thanks to a lot of hard work all round, he was able to fight in LA and gathered valuable experience by making his US debut and all that comes with it – so there will be no surprises for him in Fort Worth. Vergil is an exceptional fighter, one of the best rising stars in the sport, but we believe Mikey has the style to cause him a lot of problems, and this could be his break-out night.”
“First of all we are just happy that Virgil is fit, healthy and ready to get back in the ring,” said Ed Breeze, EVP Rights at DAZN. “Virgil is one of the most exciting fighters in boxing and in Mckinson he will be fighting a serious contender in the division. Expect fireworks August 6th, live worldwide on DAZN.”
“Dickies Arena is thrilled to host the 12-round welterweight fight in what will be one of the most exciting and gripping fights between hometown sensation Vergil Ortiz Jr. and Great Britain’s undefeated Michael McKinson.  Fort Worth is in for an action-filled fight night and Dickies Arena is ready,“ said Matt Homan, President and General Manager of Dickies Arena.
Vergil Ortiz Jr. boasts a perfect knockout undefeated record and is considered one of the most exciting fighters in the welterweight division. Originally scheduled to return to the ring on March 19 in Los Angeles against Michael “The Problem” McKinson, Ortiz, Jr. suffered a medical emergency that forced him to pull out of that fight. Fortunately, the fighter is now 100% healthy to return and is looking to make an impressive comeback in front of his hometown when he faces McKinson at Dickies Arena in Fort Worth, TX. Ortiz, Jr. was last seen in the ring in a fantastic TKO victory against world title contender Egidijus “Mean Machine” Kavaliauskas in August 2021. In addition, he has faced and won against some of the toughest fighters in the division, knocking out contenders like Antonio “Relentless” Orozco, Brad “King” Solomon, and Maurice “Mighty Mo” Hooker.
Ranked as one of the top 10 best welterweights in the world, Michael McKinson is an undefeated fighter ready to face any contender in the division. Hailing from Portsmouth, Great Britain, the 27-year-old made his US debut on March 19, defeating Alex “Chi-Town Heat” Martin after a last minute change due to the cancellation of Ortiz, Jr. vs. McKinson. Now a notable name in the boxing scene, McKinson has enjoyed an accomplished career capturing titles including the WBC International Silver Welter Title and the WBO European and Global Welter titles. Now, the UK fighter will be looking to show that he has what it takes to defeat Ortiz, Jr. in his home turf and prove he belongs among the division’s elite.
Ortiz Jr. vs. McKinson is a 12-round welterweight fight presented by Golden Boy in association with Matchroom Boxing. The event is sponsored by Hennessy “Never Stop. Never Settle” and “BetOnline – Your Online Sportsbook Experts.” The fight will take place on Saturday, August 6 at Dickies Arena in Fort Worth, TX, and will be streamed live worldwide on DAZN.